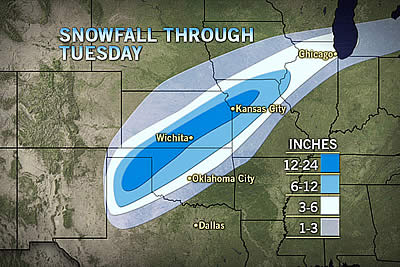 Travel on the roads and in the air will likely be brought to a standstill in these areas during the height of the storm as snowfall reaches immobilizing rates of 2-4"/hr. Winds could gust as high as 50 or even 60 mph in some locations, leading to widespread and dangerous blowing, drifting and whiteouts.

8:10 a.m. CST Monday: Closing the airports at Amarillo and Lubbock has pushed those airports to the top of the delay list at FlightAware.com.

7:30 a.m. CST Monday: Amarillo, Texas, is getting wind damage from winds gusting to over 50 mph.

"The winds are tremendous out there," AccuWeather Meteorologist Henry Margusity said. "These are winds you’d normally see in a tropical storm."

7:10 a.m. CST Monday: From the National Weather Service in Albuquerque: "Interstate 40 is closed from the east side of Albuquerque ALL THE WAY to the TX/OK line, or 390 miles!"

6:55 a.m. CST Monday: As of 6 a.m. CST, the estimated snow depth at Clovis, N.M., is 9 inches. Eleven inches of snow have fallen near Amarillo, Texas, with drifts of snow up to two feet. More significant blowing and drifting is expected, making for difficult travel conditions.

6:35 a.m. CST Monday: A series of storms over the past few weeks have brought a lot of precipitation to the drought-stricken southern Plains. This storm is going to "very quickly get the Southern Plains to normal precip," AccuWeather Agricultural Meteorologist Dale Mohler said, which is important for the winter wheat crop. However, the area will need good rain for a few years to completely recover from the drought.

6:10 a.m. CST Monday: I-27 is closed in both directions from Amarillo to Lubbock, according to the National Weather Service in Amarillo. KCBD-TV in Lubbock reported that the Lubbock Preston International airport has also been shut down.

3:20 a.m. CST Monday: Many roads closed or impassible across the Texas Panhandle as heavy snow, thunder and strong winds grip the region.

12:50 a.m. CST Monday: Moderate snow with lightning reported in both Amarilo and Pampa in Texas.