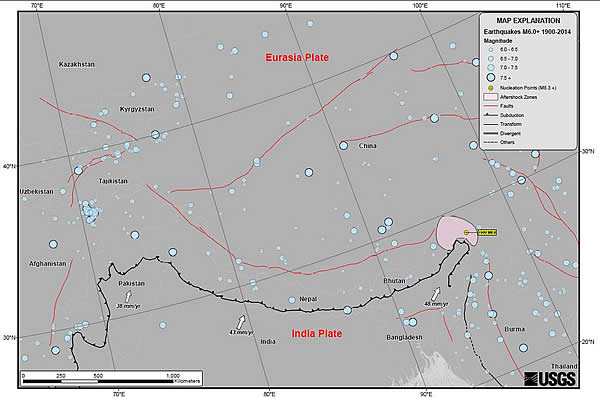 Other nearby cities for the preliminary event include:

Nearby cities for the aftershock include:

The May 12, 2015 M 7.3 Nepal earthquake (SE of Zham, China) occurred as the result of thrust faulting on or near the decollément associated with the Main Himalayan Thrust, which defines the interface between the underthrusting India plate and the overriding Eurasia plate to the north. At the location of this earthquake, approximately 80 km to the east-northeast of the Nepalese capital of Kathmandu, the India plate is converging with Eurasia at a rate of 45 mm/yr towards the north-northeast – a fraction of which (~18 mm/yr) is driving the uplift of the Himalayan mountain range. The May 12, 2015 event is the largest aftershock to date of the M 7.8 April 25, 2015 Nepal earthquake – known as the Gorkha earthquake – which was located 150 km to the west, and which ruptured much of the decollément between these two earthquakes.

While commonly plotted as points on maps, earthquakes of this size are more appropriately described as slip over a larger fault area. Events of the size of the May 12, 2015 earthquake are typically about 55×30 km in size (length x width). The April 25, 2015 M 7.8 mainshock had approximate dimensions of ~120×80 km, directed from its hypocenter eastwards, and towards Kathmandu. The May 12, 2015 earthquake is located just beyond the eastern end of that rupture.

The boundary region of the India and Eurasia plates has a history of large and great earthquakes. Prior to April 25, four events of M6 or larger had occurred within 250 km of this area over the past century. One, a M 6.9 earthquake in August 1988, 140 km to the south-southeast of the May 12 event, caused close to 1500 fatalities. The largest, an M 8.0 event known as the 1934 Nepal-Bihar earthquake, ruptured a large section of the fault to the south of this May 2015 event, and east of the April 2015 mainshock, in a similar location to the 1988 earthquake. It severely damaged Kathmandu, and is thought to have caused around 10,600 fatalities. Prior to the 20th century, a large earthquake in 1833 is thought to have ruptured a similar area as the April 25, 2015 event. To date, there have been close to 100 M3+ aftershocks of the Gorkha earthquake. In the first two hours after the May 12 event, six further aftershocks have occurred, to the southwest-to-southeast of that earthquake.

Seismotectonics of the Himalaya and Vicinity

Seismicity in the Himalaya dominantly results from the continental collision of the India and Eurasia plates, which are converging at a relative rate of 40-50 mm/yr. Northward underthrusting of India beneath Eurasia generates numerous earthquakes and consequently makes this area one of the most seismically hazardous regions on Earth. The surface expression of the plate boundary is marked by the foothills of the north-south trending Sulaiman Range in the west, the Indo-Burmese Arc in the east and the east-west trending Himalaya Front in the north of India.

The India-Eurasia plate boundary is a diffuse boundary, which in the region near the north of India, lies within the limits of the Indus-Tsangpo (also called the Yarlung-Zangbo) Suture to the north and the Main Frontal Thrust to the south. The Indus-Tsangpo Suture Zone is located roughly 200 km north of the Himalaya Front and is defined by an exposed ophiolite chain along its southern margin. The narrow (<200km) Himalaya Front includes numerous east-west trending, parallel structures. This region has the highest rates of seismicity and largest earthquakes in the Himalaya region, caused mainly by movement on thrust faults. Examples of significant earthquakes, in this densely populated region, caused by reverse slip movement include the 1934 M8.1 Bihar, the 1905 M7.5 Kangra and the 2005 M7.6 Kashmir earthquakes. The latter two resulted in the highest death tolls for Himalaya earthquakes seen to date, together killing over 100,000 people and leaving millions homeless. The largest instrumentally recorded Himalaya earthquake occurred on 15th August 1950 in Assam, eastern India. This M8.6 right-lateral, strike-slip, earthquake was widely felt over a broad area of central Asia, causing extensive damage to villages in the epicentral region.

The Tibetan Plateau is situated north of the Himalaya, stretching approximately 1000km north-south and 2500km east-west, and is geologically and tectonically complex with several sutures which are hundreds of kilometer-long and generally trend east-west. The Tibetan Plateau is cut by a number of large (>1000km) east-west trending, left-lateral, strike-slip faults, including the long Kunlun, Haiyuan, and the Altyn Tagh. Right-lateral, strike-slip faults (comparable in size to the left-lateral faults), in this region include the Karakorum, Red River, and Sagaing. Secondary north-south trending normal faults also cut the Tibetan Plateau. Thrust faults are found towards the north and south of the Tibetan Plateau. Collectively, these faults accommodate crustal shortening associated with the ongoing collision of the India and Eurasia plates, with thrust faults accommodating north south compression, and normal and strike-slip accommodating east-west extension.

Along the western margin of the Tibetan Plateau, in the vicinity of south-eastern Afghanistan and western Pakistan, the India plate translates obliquely relative to the Eurasia plate, resulting in a complex fold-and-thrust belt known as the Sulaiman Range. Faulting in this region includes strike-slip, reverse-slip and oblique-slip motion and often results in shallow, destructive earthquakes. The active, left-lateral, strike-slip Chaman fault is the fastest moving fault in the region. In 1505, a segment of the Chaman fault near Kabul, Afghanistan, ruptured causing widespread destruction. In the same region the more recent 30 May 1935, M7.6 Quetta earthquake, which occurred in the Sulaiman Range in Pakistan, killed between 30,000 and 60,000 people.

On the north-western side of the Tibetan Plateau, beneath the Pamir-Hindu Kush Mountains of northern Afghanistan, earthquakes occur at depths as great as 200 km as a result of remnant lithospheric subduction. The curved arc of deep earthquakes found in the Hindu Kush Pamir region indicates the presence of a lithospheric body at depth, thought to be remnants of a subducting slab. Cross-sections through the Hindu Kush region suggest a near vertical northerly-dipping subducting slab, whereas cross-sections through the nearby Pamir region to the east indicate a much shallower dipping, southerly subducting slab. Some models suggest the presence of two subduction zones; with the Indian plate being subducted beneath the Hindu Kush region and the Eurasian plate being subducted beneath the Pamir region. However, other models suggest that just one of the two plates is being subducted and that the slab has become contorted and overturned in places.

Further north, the Tian Shan is a seismically active intra-continental mountain belt, which extends 2500 km in an ENE-WNW orientation north of the Tarim Basin. This belt is defined by numerous east-west trending thrust faults, creating a compressional basin and range landscape. It is generally thought that regional stresses associated with the collision of the India and Eurasia plates are responsible for faulting in the region. The region has had three major earthquakes (>M7.6) at the start of the 20th Century, including the 1902 Atushi earthquake, which killed an estimated 5,000 people. The range is cut through in the west by the 700-km-long, northwest-southeast striking, Talas-Ferghana active right-lateral, strike-slip fault system. Though the system has produced no major earthquakes in the last 250 years, paleo-seismic studies indicate that it has the potential to produce M7.0+ earthquakes and it is thought to represent a significant hazard.

The northern portion of the Tibetan Plateau itself is largely dominated by the motion on three large left-lateral, strike-slip fault systems; the Altyn Tagh, Kunlun and Haiyuan. The Altyn Tagh fault is the longest of these strike slip faults and it is thought to accommodate a significant portion of plate convergence. However, this system has not experienced significant historical earthquakes, though paleoseismic studies show evidence of prehistoric M7.0-8.0 events. Thrust faults link with the Altyn Tagh at its eastern and western termini. The Kunlun Fault, south of the Altyn Tagh, is seismically active, producing large earthquakes such as the 8th November 1997, M7.6 Manyi earthquake and the 14th November 2001, M7.8 Kokoxili earthquake. The Haiyuan Fault, in the far north-east, generated the 16 December 1920, M7.8 earthquake that killed approximately 200,000 people and the 22 May 1927 M7.6 earthquake that killed 40,912.

The Longmen Shan thrust belt, along the eastern margin of the Tibetan Plateau, is an important structural feature and forms a transitional zone between the complexly deformed Songpan-Garze Fold Belt and the relatively undeformed Sichuan Basin. On 12 May 2008, the thrust belt produced the reverse slip, M7.9 Wenchuan earthquake, killing over 87,000 people and causing billions of US dollars in damages and landslides which dammed several rivers and lakes.

Southeast of the Tibetan Plateau are the right-lateral, strike-slip Red River and the left-lateral, strike-slip Xiangshuihe-Xiaojiang fault systems. The Red River Fault experienced large scale, left-lateral ductile shear during the Tertiary period before changing to its present day right-lateral slip rate of approximately 5 mm/yr. This fault has produced several earthquakes >M6.0 including the 4 January 1970, M7.5 earthquake in Tonghai which killed over 10,000 people. Since the start of the 20th century, the Xiangshuihe-Xiaojiang Fault system has generated several M7.0+ earthquakes including the M7.5 Luhuo earthquake which ruptured on the 22 April 1973. Some studies suggest that due to the high slip rate on this fault, future large earthquakes are highly possible along the 65km stretch between Daofu and Qianning and the 135km stretch that runs through Kangding.

Shallow earthquakes within the Indo-Burmese Arc, predominantly occur on a combination of strike-slip and reverse faults, including the Sagaing, Kabaw and Dauki faults. Between 1930 and 1956, six M7.0+ earthquakes occurred near the right-lateral Sagaing Fault, resulting in severe damage in Myanmar including the generation of landslides, liquefaction and the loss of 610 lives. Deep earthquakes (200km) have also been known to occur in this region, these are thought to be due to the subduction of the eastwards dipping, India plate, though whether subduction is currently active is debated. Within the pre-instrumental period, the large Shillong earthquake occurred on the 12 June 1897, causing widespread destruction.