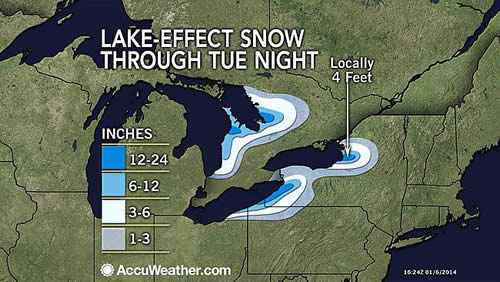 AccuWeather.com-(ENEWSPF)- AccuWeather.com reports as a dangerous blast of arctic air engulfs cities from the northern Plains to the East Coast into Monday, snow will develop and rapidly pile up in the snow belts downwind of the Great Lakes.

A major lake-effect snow event will unfold through Wednesday as bitterly cold northwest winds move over the only partially frozen Great Lakes.

According to NOAA, ice coverage throughout the Great Lakes is limited to mostly coastal locations and this lack of ice will lead to the development of blinding snow downwind of the lakes.

AccuWeather.com meteorologists are expecting that some locations to the east and southeast of the Great Lakes will end up with 2 to 3 feet of snow through Wednesdayafternoon. It is possible that a few spots, especially in the Tug Hill Plateau in New York, could end up with as much as 4 to 6 feet of snow.

Snow amounts to this magnitude will be confined to isolated areas, mainly in the most persistent bands where snowfall rates of 2 to 3 inches an hour will occur.

Some of the heaviest snow will fall from Erie, Pa., to Jamestown and Buffalo, N.Y., northward into Oswego and Watertown, N.Y. Parts of Interstate 90 through this region may become impassable for a time during the heaviest snow bands.

Interstate 81 across northern New York, downwind of Lake Ontario could be greatly impacted by white-out conditions and feet of snow.

A similar story is expected farther west along the coast of Lake Michigan from Traverse City through Grand Rapids.

In addition to the heavy snow, westerly wind gusts of 40 to 45 mph combined with temperatures in the single digits to below zero will lead to AccuWeather.com RealFeel® temperatures of 40 to 50 below zero.

If you must travel early this week near the snow belts, use extreme caution and allow for plenty of extra travel time.

Keep a basic winter survival kit in your vehicle that includes a flashlight, batteries, blanket, snacks, water, gloves, boots and a first-aid kit in case you have to pull over or become stranded.

As always, check back with AccuWeather.com as we continue to monitor the cold and snow across the region.

By Brian Edwards, Meterologist for AccuWeather.com