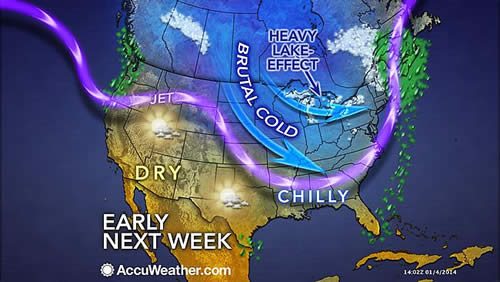 AccuWeather.com-(ENEWSPF)-AccuWeather.com reports while the worst of the weekend snowstorm will take aim at the St. Louis to Detroit corridor, ice threatens to create problems for travelers across the Northeast and down to western North Carolina.

The track of the snowstorm will lead to a brief rebound in temperatures and some rain for the East Coast Sunday through Monday.

However, roads and sidewalks will still turn slippery for a time from western North Carolina to the Northeast from lingering cold and then the arctic blast in the storm’s wake.

With the ground still frozen from Friday’s arctic blast, the rain and drizzle set to end the weekend spreading northward from western North Carolina to the Northeast will initially freeze on some surfaces.

Any icing near the coast will be brief, but the changeover to plain rain will take a little longer to occur across the interior.

A prolonged ice event is not expected, preventing widespread tree damage and power outages. There could be isolated issues, especially across northern New England where the pre-Christmas ice storm weakened trees and branches.

Even without a major ice event set to unfold, motorists and residents should not let their down. It only takes a little ice to cause untreated roads and sidewalks to turn slippery.

Also accompanying the rain and drizzle will be areas of travel-disrupting fog, especially where snow is covering the ground.

The threat for slick travel will not end with the changeover to plain rain.

A dramatic drop in temperatures in the wake of the storm’s cold front will cause any wet spots on untreated roads and sidewalks to rapidly freeze in a west-to-east fashion from the Tennessee Valley to the Northeast Sunday through Monday night.

Some places will even see the rain end as a bit of snow as the arctic air arrives. The best opportunity for this snow to accumulate and even produce whiteouts will be in the Appalachians, not along the I-95 corridor.

Once the dangerously cold air settles over the Northeast, the main travel concerns will shift to places downwind of the Great Lakes as a major lake-effect snow event unfolds.