Washington, DC–(ENEWSPF)–March 7, 2014. Forty Minnesota beekeepers have called on the state’s Department of Agriculture to suspend the use of corn seeds treated with bee-killing neonicotinoid pesticides, now one of the most ubiquitously used insecticides nationwide. Their move follows a commitment by two Minnesota state agencies to study the impact of neonicotinoid pesticides, which—given mounting research implicating neonicotinoids in bee declines—beekeepers claim do not go far enough. 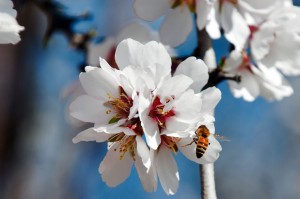 Minnesota beekeeper Steve Ellis, owner of Old Mill Honey Co., expressed the petition’s rationale to MPRNews, “Beekeepers in Minnesota last year and in years previous have been reporting mortality events at corn seeding time,” said Mr. Ellis, who has about 2,500 hives in Barrett, Minn. “Apparently the dust is getting off of the corn seeding and going off site and causing poisoning of honey bees on flowers and around their hives.”

The petitioners represented more than 10 percent of managed honey bees in the state with a total of 40,000 hives. But many, like Mr. Ellis, are contracted to provide pollinator services to crops around the nation, not just in Minnesota. These crops include cherries, blueberries, pumpkins, apples, and almonds. In California, the $3-billion almond industry spends $239 million annually to rent more than 1 million honeybee colonies required for almond production. Honey bee health then not only impacts the livelihood of beekeepers in Minnesota, but the entire national food system.

Seeds treated with neonicotinoids, a class of insecticides that includes clothianidin and imidicloprid, pose a major risk to bees from fugitive dust off of seed planters, which EPA has recognized as a causing bee kills nationwide. They are particularly dangerous because, in addition to being acutely toxic in high doses, their use also results in serious sublethal effects when insects are exposed to chronic low doses, as they are through pollen and water droplets laced with the chemical, in addition to dust that is released into the air when coated seeds are planted with automated vacuum seed planters. These effects cause significant problems for the health of individual honey bees as well as the overall health of honey bee colonies. Effects include disruptions in bee mobility, navigation, feeding behavior, foraging activity, memory and learning, and overall hive activity.

The robust evidence of the wide ranging harm neonicotinoids cause to pollinators led the European Union to ban the use of these chemicals in agriculture for two years. Late last year, agrichemical giants Syngenta and Bayer announced that they would be suing the E.U. over its decision.

Use our model resolution to transform your community and raise awareness about pollinator health.

Join us in asking Lowe’s and Home Depot and other leading garden centers to take action and stop the sale of neonicotinoids and plants treated with these chemicals.

Tell your member of Congressto support the Save America’s Pollinators Act.

Sign the  Pesticide Free Zone Declaration and pledge to maintain your yard, park, garden or other green space as organically-managed and pollinator friendly.

Use our model resolution to transform your community and raise awareness about pollinator health.

Continue your commitment to helping pollinators by joining us April 11-12 for Beyond Pesticides’ 32nd National Pesticide Forum, “Advancing Sustainable Communities: People, pollinators, and practices,”  in Portland, OR. The Forum will focus on solutions to the decline of pollinators and other beneficial organisms, strengthening organic agriculture, improving farmworker protection and agricultural justice, and creating healthy buildings, schools and homes. Space is limited so register now.