Washington, DC–(ENEWSPF)–October 23, 2015.  At 8 a.m. EDT on October 23, 2015, the National Hurricane Center said that Hurricane Patricia had grown into a monster hurricane. In fact, it is the strongest eastern north pacific hurricane on record. NASA-NOAA’s Suomi NPP satellite analyzed the temperatures and structure within the storm as it passed overhead. 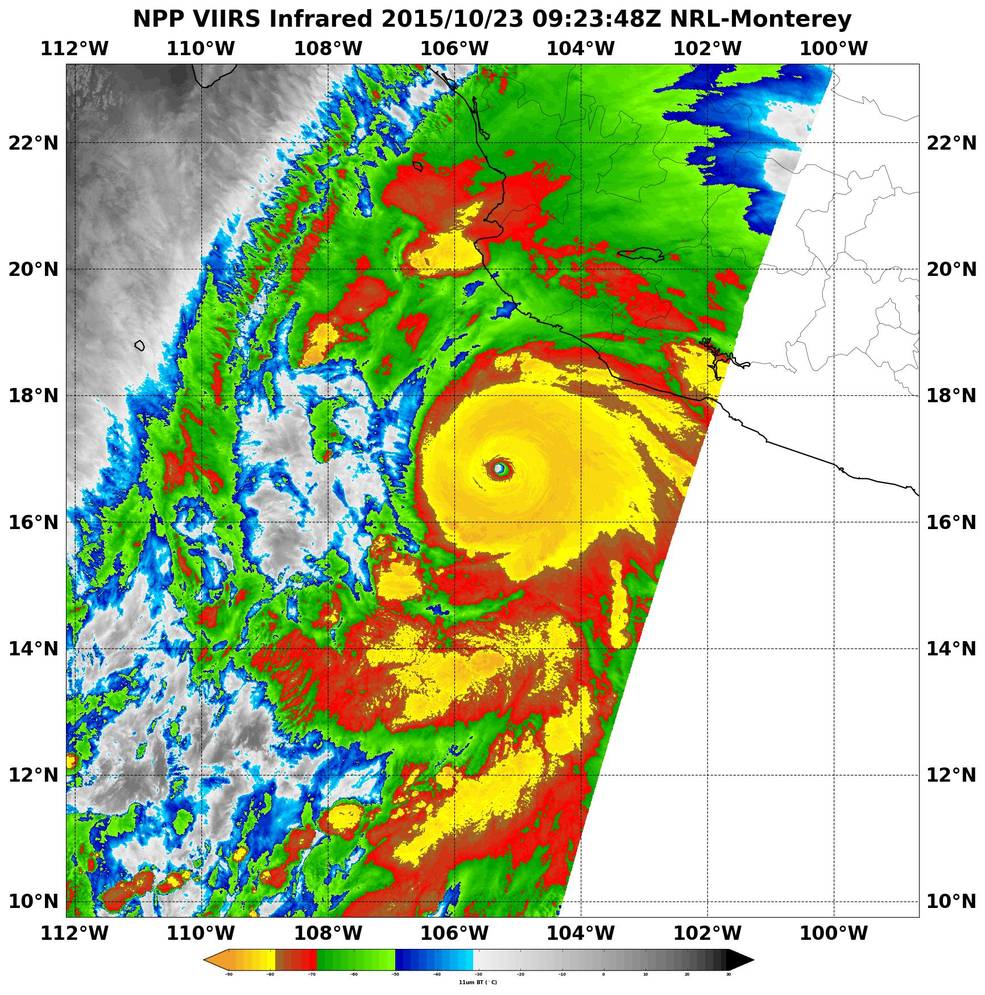 When NASA-NOAA’s Suomi NPP satellite passed over Patricia on October 23 at 5:23 a.m. EDT the VIIRS instrument that flies aboard Suomi NPP looked at the storm in infrared light. Cloud top temperatures of thunderstorms around the eyewall were near minus 90 Celsius (minus 130 Fahrenheit). Credits: NRL/NASA/NOAA

When NASA-NOAA’s Suomi NPP satellite passed over Patricia on October 23 at 0923 UTC (5:23 a.m. EDT) the Visible Infrared Imaging Radiometer Suite or VIIRS instrument that flies aboard Suomi NPP looked at the storm in infrared light. Cloud top temperatures of thunderstorms around the eyewall were near minus 90 Celsius (minus 130 Fahrenheit). Recent microwave imagery shows hints of a concentric eyewall developing.  If the trend toward an eyewall replacement continues, it would cause the intensity to at least level off later today.

NHC said that Hurricane conditions are expected to first reach the hurricane warning area this afternoon.  Tropical storm conditions are beginning to spread across portions of the warning area. Patricia is expected to produce total rainfall accumulations of 8 to 12 inches, with isolated maximum amounts of 20 inches, over the Mexican states of Nayarit, Jalisco, Colima, Michoacan and Guerrero through Saturday. These rains could produce life-threatening flash floods and mud slides. An extremely dangerous storm surge is expected to produce significant coastal flooding near and to the right of where the center makes landfall.  Near the coast, the surge will be accompanied by large and destructive waves.

Swells generated by Patricia are already affecting portions of the southern coast of Mexico, and will spread northwestward during the next day or so. These swells are likely to cause life-threatening surf and rip current conditions.

NHC forecasters said that Patricia is heading for potentially catastrophic landfall in southwestern Mexico later today. NHC Forecaster Pasch said “in addition to the coastal impacts, very heavy rainfall is likely to cause life-threatening flash floods and mud slides in the Mexican states of Jalisco, Colima, Michoacan and Guerrero continuing into Saturday.

Given the very mountainous terrain that Patricia should encounter after landfall, the cyclone should weaken even faster over land than predicted by the normal inland decay rate.”

Updated forecasts can be found at: www.nhc.noaa.gov