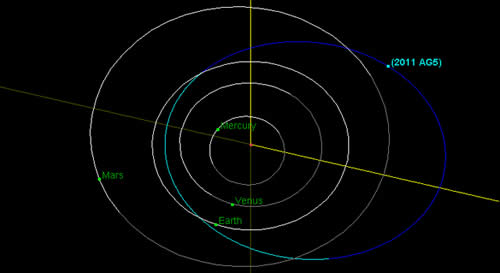 Washington, D.C.-(ENEWSPF)- Researchers anticipate that asteroid 2011 AG5, discovered in January 2011, will fly safely past and not impact Earth in 2040.

Current findings and analysis data were reported at a May 29 workshop at NASA’s Goddard Space Flight Center in Greenbelt, Md., attended by scientists and engineers from around the world. Discussions focused on observations of potentially hazardous asteroids (PHAs).

Observations to date indicate there is a slight chance that AG5 could impact Earth in 2040. Attendees expressed confidence that in the next four years, analysis of space and ground-based observations will show the likelihood of 2011 AG5 missing Earth to be greater than 99 percent.

Measuring approximately 460 feet (140 meters) in size, the space rock was discovered by the NASA-supported Catalina Sky Survey operated by the University of Arizona in Tucson. Several observatories monitored 2011 AG5 for nine months before it moved too far away and grew too faint to see.

"While there is general consensus there is only a very small chance that we could be dealing with a real impact scenario for this object, we will still be watchful and ready to take further action if additional observations indicate it is warranted," said Lindley Johnson, program executive for the Near-Earth Object (NEO) Observation Program at NASA Headquarters in Washington.

Several years ago another asteroid, named Apophis, was thought to pose a similar impact threat in 2036. Additional observations taken from 2005 through 2008 enabled NASA scientists to refine their understanding of the asteroid’s path, which showed a significantly reduced likelihood of a hazardous encounter.

"Any time we’re able to observe an asteroid and obtain new location data, we’re able to refine our calculations of the asteroid’s future path," said Don Yeomans, manager of NASA’s NEO Program Office at the Jet Propulsion Laboratory in Pasadena, Calif. "When few observations exist, our initial orbit calculation will include a wider swath to account for uncertainties. With more data points, the knowledge of the potential positions of the asteroid improves and the swath becomes smaller — typically eliminating the risk of an impact."

Observations of 2011 AG5 have been limited to date because of its present location beyond the orbit of Mars and in the daytime sky on the other side of the sun. In fall 2013, conditions will improve to allow space- and ground-based telescopes to better track the asteroid’s path. At that time, 2011 AG5 will be 91 million miles (147 million kilometers) from Earth but favorably located for observations in the late evening sky.

The level of hazard will gain even more clarity in 2023, when the asteroid is approximately 1.1 million miles (1.8 million kilometers) from Earth. If 2011 AG5 passes through a 227-mile-wide (365-kilometer) region in space called a keyhole in early February 2023, Earth’s gravitational pull could influence the object’s orbital path just enough to bring it back for an impact on February 5, 2040. If the asteroid misses the keyhole, an impact in 2040 will not occur.

"Given our current understanding of this asteroid’s orbit, there is only a very remote chance of this keyhole passage even occurring," said Johnson.

Although scientists widely expect it to be a safe flyby, they acknowledge the slight chance that computed odds could rise as a result of observations to be taken from 2013 to 2016. According to the experts at the workshop, even if the odds do increase, there is still ample time to plan and carry out at least one of several viable missions to change the asteroid’s course.

PHAs are a subset of the larger group of near-Earth asteroids. They have the closest orbits to Earth’s, coming within 5 million miles (about 8 million kilometers). They are large enough to enter Earth’s atmosphere intact and cause damage on at least a local scale. Damage from an asteroid the size of 2011 AG5 could cover a region at least a hundred miles wide.

NASA established the NEO Program in 1998 to coordinate the agency’s efforts to detect, track and characterize Earth-approaching NEOs and comets larger than 1 kilometer in size. The program now also searches for NEOs as small as object 2011 AG5. NASA supports NEO observation, tracking and analysis activities worldwide. Activities are coordinated through the NEO Program Office at JPL.

To read the workshop report and findings, visit: http://neo.jpl.nasa.gov.

For information about NASA asteroid missions and activities, visit: http://www.nasa.gov/asteroids.