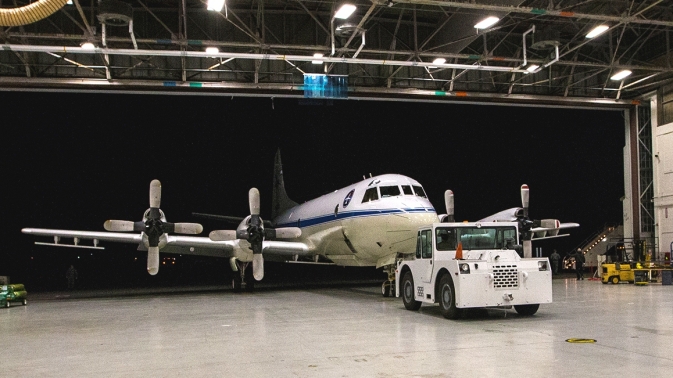 The NASA P-3 leaving the hangar at Wallops Flight Facility in Virginia on the morning of March 10 in preparation for the flight to Thule Air Base, Greenland. Image Credit: NASA/Patrick Black

The mission, known as Operation IceBridge, is to gather data on changes to polar ice and maintain continuity of measurements between NASA’s Ice, Cloud and Land Elevation Satellite (ICESat) missions. The original ICESat mission ended in 2009, and its successor, ICESat-2, is scheduled for launch in 2017.

By flying yearly campaigns, IceBridge provides valuable data on rapidly changing areas of polar land and sea ice. Flights run through May 23 from Thule Air Base and Kangerlussuaq, Greenland, with a week-long deployment to Fairbanks, Alaska.

The first part of the campaign will focus on sea ice in the Arctic Ocean north of Greenland and in the Beaufort and Chukchi seas north of Alaska. As in the past two years, IceBridge will provide data on ice thickness to help sea ice researchers develop more accurate seasonal Arctic sea ice models.

The remainder of the campaign will turn to measuring ice surface elevation and thickness at many of the Greenland Ice Sheet’s outlet glaciers, which are channels of ice that flow from an ice sheet, constrained on its sides by bedrock. The surface elevation measurements taken by IceBridge’s laser altimeter, the Airborne Topographic Mapper, will provide scientists data on how the ice sheet is changing and give a useful benchmark for ICESat-2.

Radar instruments such as the Multichannel Coherent Radar Depth Sounder, which is operated by the Center for Remote Sensing of Ice Sheets at the University of Kansas in Lawrence, Kan., will peer beneath the surface to collect the data on ice thickness and sub-ice terrain, internal layering in the ice sheet and snow depth.

“A small change in albedo over the entire Arctic could have a significant effect on how much heat is absorbed by the surface,” said Nathan Kurtz, a sea ice scientist at NASA’s Goddard Space Flight Center in Greenbelt, Md. This year’s flights will serve as a preliminary test for the instrument.

Throughout the campaign, the IceBridge team will coordinate its efforts with other research groups working in the region. Researchers on the surface will study sea ice and snow thickness near Barrow, Alaska, in the Canadian Basin and just north of Greenland. Measurements in these areas will later be used to further verify the accuracy of IceBridge’s snow radar instrument, particularly in areas with rough ice surfaces.

According to Jackie Richter-Menge, sea ice scientist with the U.S. Army Corps of Engineers Cold Regions Research and Engineering Laboratory in Hanover, N.H., snow radar works well on ice that has not been deformed. Ice with a rougher surface can scatter radar waves, making the returning signal harder to interpret.

The IceBridge team also will work with the CryoVEx (CryoSat-2 Validation Experiment) team, which operates a campaign to verify measurements made by the European Space Agency’s ice-monitoring satellite, CryoSat-2, in orbit since 2010. The IceBridge team plans to fly directly beneath the orbit of CryoSat-2 around the same time the satellite passes overhead to compare measurements. Researchers from the European Space Agency, York University in Toronto, Canada, and the Technical University of Denmark also will be flying airborne instruments to measure ice and snow.

“It’s really exciting to have all of these people working together,” said Richter-Menge. “It shows how interested everyone is in advancing these measurements.”

Three high school science teachers from the United States, Denmark and Greenland also will join IceBridge and fly with the team to get first-hand experience and knowledge they can bring back to their classrooms. These teachers come to IceBridge through partnerships with the U.S.-Denmark-Greenland Joint Committee and PolarTREC, a U.S.-based program that pairs teachers with polar research expeditions.

For more about Operation IceBridge and to follow this year’s campaign, visit: http://www.nasa.gov/icebridge

For more about PolarTREC and the IceBridge teacher research experience, visit: http://www.polartrec.com/expeditions/airborne-survey-of-polar-ice-2014

NASA monitors Earth’s vital signs from land, air and space with a fleet of satellites and ambitious airborne and ground-based observation campaigns. NASA develops new ways to observe and study Earth’s interconnected natural systems with long-term data records and computer analysis tools to better see how our planet is changing. The agency shares this unique knowledge with the global community and works with institutions in the United States and around the world that contribute to understanding and protecting our home planet.