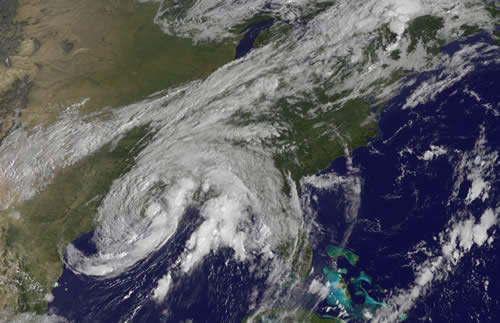 This visible image of Tropical Storm Lee was taken from the GOES-13 satellite on Sunday, Sept. 4 at 9:32 a.m. EDT. It shows the extent of Lee’s cloud cover over Louisiana, Mississippi, Alabama and the Florida Panhandle and spread into the Tennessee Valley. The thickest clouds and heaviest rainfall stretch from the northeast to southwest of the center. Credit: NASA/NOAA GOES Project

NASA-(ENEWSPF)- Tropical Storm Lee has continued his slow, soaking, painful crawl inland. Satellites from both NASA and NOAA satellites have been showing the extent of the storm, and where the strongest thunderstorms and rainfall are occurring, and the bulk of it remains over the Gulf of Mexico.

NASA’s Aqua satellite and NOAA’s GOES-13 satellite revealed that Lee finally made landfall in Louisiana after two painful days of heavy rain to Louisiana, Mississippi and Alabama. Lee has grown in size, which typical for a waning tropical storm. Tropical Storm-force winds now extend out 275 miles from the center.

NOAA’s GOES-13 satellite provided a visible image of Tropical Storm Lee on Sunday, Sept. 4 at 9:32 a.m. EDT. It shows the extent of Lee’s cloud cover over Louisiana, Mississippi, Alabama and the Florida Panhandle and spread into the Tennessee Valley. The thickest clouds and heaviest rainfall stretch from the northeast to southwest of the center. The image was created at NASA’s Goddard Space Flight Center, Greenbelt, Md. at the NASA/NOAA GOES Project. Lee also appears on satellite imagery to be elongated. The GOES-13 satellite imagery shows that the storm appears to stretch from the northeast to the southwest, and a large part of Lee still remains over the Gulf of Mexico.

On Saturday, Sept. 3, 2011 NASA’s Aqua Satellite took an infrared snapshot at the cold cloud temperatures within Tropical Storm Lee that told forecasters where the highest, coldest, strongest thunderstorms were in the storm. The Atmospheric Infrared Sounder (AIRS) instrument on Aqua took the image at 3:47 p.m. EDT when Lee’s center had still not yet made landfall and was still sitting south of the Louisiana coast. The strongest thunderstorms and coldest clouds stretched from Mobile Bay, south into the Gulf of Mexico and covered about one-third of the Gulf of Mexico.

On Sunday, Sept. 4, a tropical storm warning is in effect for Destin, Florida westward to Sabine Pass Texas, including the city of New Orleans, Lake Pontchartrain, and Lake Maurepas.

At 8 a.m. EDT on Sept. 4, Tropical Storm Lee’s winds had dropped from 60 mph exactly 24 hours before to 45 mph. Lee’s center was over Vermillion Bay, Louisiana near 29.7 North and 92.0 West. It was crawling to the northeast near 3 mph (6 kmh) and expected to continue in that direction today, turning to the east-northeast tonight. Because Lee’s center is over land, he is expected to continue weakening gradually in the next couple of days. Lee’s outer bands still extend far over the Gulf of Mexico, bringing in more moisture and keeping the system going.

Rainfall has been a serious issue with Lee, and will continue to soak the Gulf coast states and now the Tennessee Valley. Tropical storm lee is expected to produce total rain accumulations of 10 to 15 inches from the central Gulf Coast northward into the Tennessee valley. Isolated maximum amounts of 20 inches through Monday night. Meanwhile, storm surge continues to batter the Gulf coast, and tropical storm-force winds also continue. Isolated tornadoes are possible today and tonight over parts of southern Louisiana southern Mississippi, southern Alabama and the far western Florida panhandle.

Where is Lee Going?

Lee is going to be hitching a ride on an elongated area of low pressure (trough) in the next 24-36 hours. The National Hurricane Center noted that "A trough over the north-central U.S. is forecast to dig southeastward over the next day or so. The flow on the southern side of the trough is expected to turn the Tropical cyclone toward the northeast and east-northeast during the next 24 to 36 hours."

Wind shear weakened Katia again today. At 5 a.m. EDT, Sept. 4, Katia was reduced back down to a tropical storm with maximum sustained winds near 70 mph. Katia was 370 miles northeast of the Leeward Islands, near 21.43 North and 58.5 West. It was moving to the northwest near 12 mph and had a minimum central pressure of 992 millibars. Although Katia is causing rough surf in the Northern Leeward Islands today, it is expected to subside later. Forecast models bring Katia close to the U.S. coastline by Friday of this week, so NASA satellites will be keeping an eye on her.