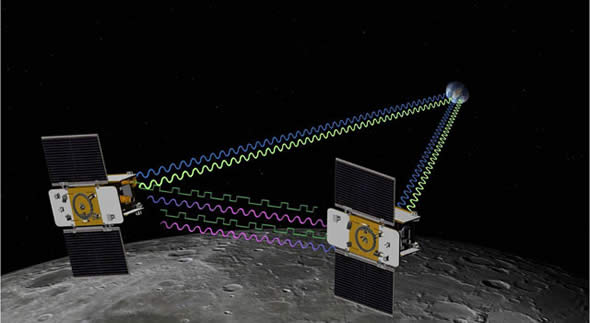 Pasadena, CA-(ENEWSPF)- NASA’s Gravity Recovery And Interior Laboratory (GRAIL)-A spacecraft is within 24 hours of its insertion burn that will place it into lunar orbit. At the time the spacecraft crossed the milestone at 1:21 p.m. PST today (4:21 p.m. EST), the spacecraft was 30,758 miles (49,500 kilometers) from the moon.

As they close in on the moon, both orbiters move toward the moon from the south, flying nearly directly over the lunar south pole. The lunar orbit insertion burn for GRAIL-A will take approximately 40 minutes to complete and change the spacecraft’s velocity by about 427 mph (687 kph). GRAIL-B’s insertion burn – occurring 25 hours later — will last about 39 minutes and is expected to change its velocity by 430 mph (692 kph).

The insertion maneuvers will place each orbiter into a near-polar, elliptical orbit with an orbital period of 11.5 hours. Over the following weeks, the GRAIL team will execute a series of burns with each spacecraft to reduce their period down to just under two hours. At the start of the science phase in March 2012, the two GRAILs will be in a near-polar, near-circular orbit with an altitude of about 34 miles (55 kilometers).

During the science phase, the moon will rotate three times underneath the GRAIL orbit. The collection of gravity data over one complete rotation (27.3 days) is referred to as a Mapping Cycle. When science collection begins, the spacecraft will transmit radio signals precisely defining the distance between them as they orbit the moon in formation. Regional gravitational differences on the moon are expected to expand and contract that distance. GRAIL scientists will use these accurate measurements to define the moon’s gravity field. The data will allow mission scientists to understand what goes on below the surface of our natural satellite. This information will help us learn more about how the moon, Earth and other terrestrial planets formed.

NASA’s Jet Propulsion Laboratory, Pasadena, Calif., manages the GRAIL mission. The Massachusetts Institute of Technology, Cambridge, is home to the mission’s principal investigator, Maria Zuber. The GRAIL mission is part of the Discovery Program managed at NASA’s Marshall Space Flight Center in Huntsville, Ala. Lockheed Martin Space Systems, Denver, built the spacecraft. JPL is a division of the California Institute of Technology in Pasadena.

More information about GRAIL is online at: http://www.nasa.gov/grail and http://grail.nasa.gov .