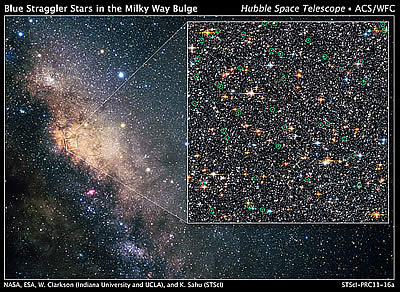 Washington-(ENEWSPF)- NASA’s Hubble Space Telescope has found a rare class of oddball stars called blue stragglers in the hub of our Milky Way, the first detected within our galaxy’s bulge.

Blue stragglers are so named because they seemingly lag behind in the aging process, appearing younger than the population from which they formed. While they have been detected in many distant star clusters, and among nearby stars, they never have been seen inside the core of our galaxy.

It is not clear how blue stragglers form. A common theory is that they emerge from binary pairs. As the more massive star evolves and expands, the smaller star gains material from its companion. This stirs up hydrogen fuel and causes the growing star to undergo nuclear fusion at a faster rate. It burns hotter and bluer, like a massive, young star.

The findings support the idea that the Milky Way’s central bulge stopped making stars billions of years ago. It now is home to aging sun-like stars and cooler red dwarfs. Giant blue stars that once lived there have long since exploded as supernovae.

The results have been accepted for publication in an upcoming issue of the Astrophysical Journal. Lead author Will Clarkson of Indiana University in Bloomington and the University of California in Los Angeles, will discuss them today at the American Astronomical Society meeting in Boston.

"Although the Milky Way bulge is by far the closest galaxy bulge, several key aspects of its formation and subsequent evolution remain poorly understood," Clarkson said. "Many details of its star-formation history remain controversial. The extent of the blue straggler population detected provides two new constraints for models of the star-formation history of the bulge."

The discovery followed a seven-day survey in 2006 called the Sagittarius Window Eclipsing Extrasolar Planet Search (SWEEPS). Hubble peered at 180,000 stars in the crowded central bulge of our galaxy, 26,000 light-years away. The survey was intended to find hot Jupiter-class planets that orbit very close to their stars. In doing so, the SWEEPS team also uncovered 42 oddball blue stars with brightness and temperatures typical for stars much younger than ordinary bulge stars.

The observations clearly indicate that if there is a young star population in the bulge, it is very small. It was not detected in the SWEEPS program. Blue stragglers long have been suspected to be living in the bulge, but had not been observed because younger stars in the disk of our galaxy lie along the line-of-sight to the core, confusing and contaminating the view.

Astronomers used Hubble to distinguish the motion of the core population from foreground stars in the Milky Way. Bulge stars orbit the galactic center at a different speed than foreground stars. Plotting their motion required returning to the SWEEPS target region with Hubble two years after the first observations were made. The blue stragglers were identified as moving along with the other stars in the bulge.

"The size of the field of view on the sky is roughly that of the thickness of a human fingernail held at arm’s length, and within this region, Hubble sees about a quarter million stars toward the bulge," Clarkson said. "Only the superb image quality and stability of Hubble allowed us to make this measurement in such a crowded field."

From the 42 candidate blue stragglers, the investigators estimate 18 to 37 are likely genuine. The remainder could be a mix of foreground objects and, at most, a small population of genuinely young bulge stars.

"The SWEEPS program was designed to detect transiting planets through small light variations," said Kailash Sahu, the principal investigator of the SWEEPS program. "Therefore the program could easily detect the variability of binary pairs, which was crucial in confirming these are indeed blue stragglers."

Hubble is a project of international cooperation between NASA and the European Space Agency. NASA’s Goddard Space Flight Center in Greenbelt, Md., manages the telescope. The Space Telescope Science Institute (STScI) conducts Hubble science operations. STScI is operated for NASA by the Association of Universities for Research in Astronomy in Washington. For images and more information about the findings, visit: