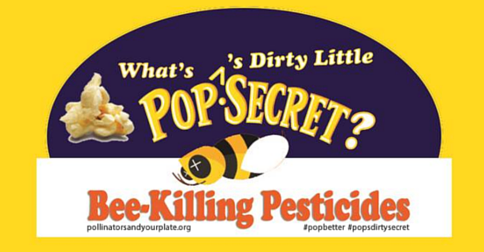 WASHINGTON, DC–(ENEWSPF)–October 14, 2015—Center for Food Safety today launched a new campaign asking Pop Secret and Pop Weaver, two of the largest popcorn companies in the country, to source their popcorn from seeds that are free of neonicotinoid insecticides. Corn seeds are routinely coated in neonicotinoids even if there is no pest problem present; consumers are asking the popcorn companies to stop this practice in their supply chain in order to protect bees and other important pollinators.

“Bees are dying at alarming rates, and scientists have identified neonicotinoids as a key factor in poor pollinator health. We’re asking these companies to stand as leaders in their industry and help save these incredibly important species. Without bees, our agricultural economy would take a major hit,” said Larissa Walker, pollinator program director at Center for Food Safety.

Neonicotinoids are the most widely used insecticides in the world, and because they are systemic, the chemicals are dispersed throughout treated plants, rendering the whole plant toxic and contaminating surrounding plant life and water bodies frequented by pollinators. Neonicotinoids can last in the environment for several years after application and exposure to these chemicals threatens a wide range of animals, including bees, butterflies, birds, and marine species. The largest single use of neonicotinoids is as a seed coating for field crops. Researchers estimate that 95-99% of all field corn grown in the U.S. comes from seed coated with a neonicotinoid.

As part of the campaign, CFS launched a new website (www.pollinatorsandyourplate.org) and an animated video explaining the dangers of neonicotinoid seed coatings and calling on Pop Secret and Pop Weaver to take action.

“As two of the largest popcorn brands in the U.S., Pop Secret and Pop Weaver can make a real impact by phasing out their use of neonic-coated seeds,” said Walker.

Although it is currently difficult to obtain uncoated seeds in the U.S.—growers in Canada requested and received uncoated seed, proving that it is possible to diversify the seed supply with neonicotinoid-free seed options when consumers, companies, and growers demand it.

The cost-effectiveness of neonicotinoid seed coatings has been challenged in recent years, indicating that their frequent use pushed by chemical companies is unnecessary. The influential 2014 CFS report “Heavy Costs” revealed that neonicotinoid coatings typically offer little, if any, benefit to farmers as far as crop yields, and cause widespread environmental and economic damage. Other recent studies – including by EPA itself – have reinforced CFS’s conclusions.

Given the countless risks, lack of benefits, and widespread consumer demand for pollinator protection, it’s time for Pop Secret and Pop Weaver to commit to phasing out the use of neonic-coated seeds for their popcorn.