Washington, DC–(ENEWSPF)–January 26, 2015.  Last week, the U.S. Environmental Protection Agency (EPA) announced it completed the registration of a new pesticide, flupyradifurone, that would be marketed as an alternative to neonicotinoid pesticides, and “safer for bees.” A closer look at this chemical reveals that the agency is grossly misleading the public on the ecological safety of flupyradifurone since the chemical is systemic, persistent, and highly acutely toxic to adult honey bees. At a time when bees are declining, advocates say it is inappropriate for EPA to introduce yet another bee toxic chemical to the market. 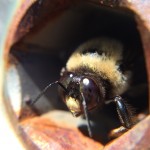 Flupyradifurone (“Sivanto”) is a new systemic, butenolide insecticide from Bayer CropScience that is to be used on crops such as citrus, cotton, potatoes and many others, and also as seed treatment. Note: EPA is still considering soybean seed treatment. The chemical is a neurotoxic insecticide that can inhibit nicotinic acetylcholine receptors (nAChR) in the nervous system. Neonicotinoids, widely linked to devastating health impacts on bees, affect the nervous system in the same way. However, EPA states that flupyradifurone differs from neonicotinoids because of the way it binds to the receptors and is metabolized. However, most troubling is that, based on EPA’s registration documents, the chemical is highly toxic to adult bees for short-term oral exposures.

According to EPA, flupyradifurone went through a rigorous assessment review, given the elevated concerns surrounding bee decline and its link to pesticides. However, EPA’s review raises more questions than answers on why this latest chemical with potential risks to bees is being registered. EPA’s registration document states, “While the acute oral toxicity study indicates that flupyradifurone is highly toxic to individual adult honey bees, longer-term laboratory-based studies of both larval and adult bees show no adverse effects up to the highest dietary concentration tested.” For bees that come into surface contact with the chemical, EPA states in one document that the chemical is “practically nontoxic to adult bees on an acute contact exposure basis.” But in another document it reports, “In the acute contact toxicity test, some bees showed movement coordination problems or lethargy at the two highest concentrations…” after a few hours of exposure. Despite this, EPA concludes that its review of submitted field studies “did not result in any adverse effect on overall colony performance or overwintering capacity..” EPA documents can be found here.

As a systemic pesticide, it is expected that flupyradifurone will be taken up by the plant and persist in all plant tissues, including pollen and nectar. EPA finds that while residues in pollen were higher than those in nectar, “residues declined in pollen and nectar within a two-week window following treatment.” This means that bees can expect to endure at least two weeks of exposure to high levels of flupyradifurone residues on pollen and nectar. For adult bees that forage on this pollen and nectar, death is imminent as the agency has already found that flupyradifurone is highly acutely toxic from ingestion (oral exposures). To further compound this, EPA notes that the field studies reveal high mortality in adult bees within 24 hours of treatment. Note: It is also important to point out that EPA seemingly believes that it will be acceptable for bees to touch or tread on flupyradifurone residues, as long as they do not ingest it from pollen. This is certainly counterintuitive to natural bee behavior and anyone observing bees.

Of concern is the agency’s failure to take into account the cumulative impact of flupyradifurone and neonicotinoids like imidacloprid and clothianidin on bees and other non-target insects in the environment. Neonicotinoids, as well as a host of other insecticides are currently used as seed treatment and in other areas of agriculture and home and garden sites. Adding flupyradifurone to the chemical mix found in the environment will mean that bees and other non-target organisms will be exposed to mixtures of chemicals that have yet to be evaluated for their combined or synergistic effects, and possibly compounding the already dire plight of pollinators.

It was less than one year ago that EPA introduced to the market sulfoxaflor, another bee-toxic insecticide registered by EPA despite warnings from concerned groups and beekeepers. Beekeepers have since sued EPA over the registration of sulfoxaflor. Given the global phenomenon of bee decline and the precautions taken in the European Union regarding bee health with its two-year suspension of neonicotinoid pesticides, advocates are calling it irresponsible for EPA to allow into the environment yet another chemical with a high hazard potential for bee health. To many, EPA’s decision appears counter to current agency and interagency work to protect pollinators.

A recent government sponsored national survey indicates that U.S. beekeepers experienced a 45.2% annual mortality rate with their hives between April 2012 and March 2013. During the winter of 2013/14, two-thirds of beekeepers experienced loss rates greater than the established acceptable winter mortality rate. EPA, which is part of the White House Task Force on Pollinator Health, tasked with stemming the tide on bee declines, has a responsibility to bees, the environment and beekeepers in protecting bees and other pollinators from dangerous pesticides.