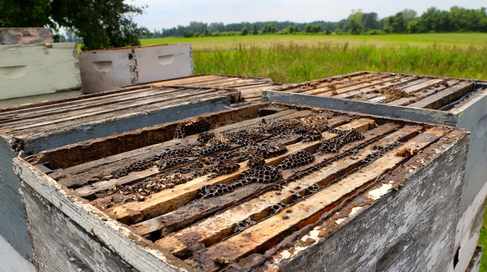 Washington, DC–(ENEWSPF)–September 12, 2014.  Center for Food Safety today expressed concerns with a bill that could derail positive efforts already underway in Congress and the White House to improve pollinator health.  The purposefully narrow and limiting bill, H.R. 5447, was introduced by Rep. Austin Scott (R-Ga.) and would amend the Federal Insecticide, Fungicide and Rodenticide Act (FIFRA) to push for faster approval of pesticides to control “parasitic pests,” such as the varroa mite.

“Fast-tracking pesticide approvals is what got us into this mess in the first place and focusing strictly on varroa mites will not get us out,” said Larissa Walker, pollinator campaign director for Center for Food Safety. “Congress cannot ignore every other key factor in pollinator declines, particularly the pesticides known to damage their health, and expect to solve this crisis.”

While varroa mites are one of several factors impacting honey bee health, beekeepers and scientists have consistently pointed a finger at pesticides such as neonicotinoids as a primary culprit in honey bee and other pollinator declines.

“There is already a robust bill in Congress, with support from beekeepers, aimed at addressing the full spectrum of stressors impacting pollinator health. It would be a shame if this new bill distracted attention away from it and let the pesticide industry off the hook,” said Colin O’Neil, director of government affairs.

In April, a House Agriculture Subcommittee held a hearing solely focused on varroa. The panel of witnesses included a representative of Bayer but no one from the beekeeping industry. Beekeepers have been adamant in their demands to curtail pesticide use in order to preserve their industry and protect the food supply.

“Beekeepers do not consider mites as the top problem, and many like myself find it a non-issue.  Pesticides are still the number one issue for all beekeepers,” said New York beekeeper Jim Doan.

Speaking at the hearing, USDA official Jeff Pettis testified, “But even if the varroa mite problem were solved today, this would not by itself solve all of the problems facing honey bees and beekeepers.”

In July 2013, Representatives John Conyers and Earl Blumenauer introduced the “Saving America’s Pollinators Act,” (HR 2692), which would suspend the use of four of the most toxic neonicotinoid chemicals until the Environmental Protection Agency conducts a full review of their safety and can make an informed and scientifically-sound decision about their use.

In June, the White House released instructions to all federal agencies spelling out a comprehensive plan to deal with the urgent crisis facing honey bees and other pollinators. The memorandum specifically called on EPA to assess the risks of pesticides, particularly neonicotinoids.

For more on the history of neonicotinoids and the problems with EPA’s approval process, go here.