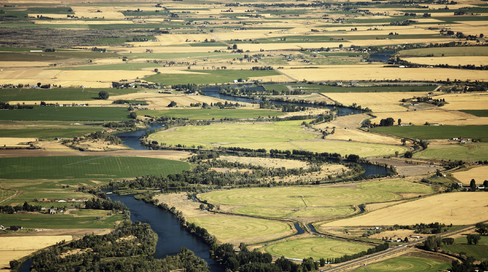 Washington, DC–(ENEWSPF)–September 17, 2015. Center for Food Safety (CFS) yesterday released a new report, “Water Hazard: Aquatic Contamination by Neonicotinoid Insecticides in the United States,” showing widespread water contamination with neonicotinoid insecticides and threatening a range of aquatic invertebrates including crabs and insects. In particular, the report draws attention to the use of neonicotinoid seed coatings, up to 95 percent of which ends up in the environment, not the crop. Neonicotinoids are a class of insecticide known to have acute and chronic effects on honey bees and other pollinator species and are considered a major factor in overall bee population declines and poor health.

“This report shines light for the first time on the full scope of this unrecognized threat to our waters, with toxic effects that will harm entire food chains and ecosystems. It is clear that the problems with widespread use of neonicotinoids extend well beyond the impacts to pollinators.  The extensive water contamination and numerous high-level findings in this report raise the alarm that we are approaching an ecological crisis – a second Silent Spring,” said Larissa Walker, pollinator program director at Center for Food Safety.

The report examines representative case studies from Maryland, Iowa, and California, each of which is experiencing widespread neonicotinoid contamination exceeding recommended standards as determined by leading experts in aquatic species toxicology. The report also highlights contamination elsewhere, including New York, South Dakota, Texas, and Wisconsin. It describes the key roles of irrigation and field drainage and discusses the growing risks to aquifers, vulnerable wetlands and the valuable wildlife inhabiting those areas, such as migratory birds and sport fish.

“It is especially shocking that most of this contamination has come from pesticidal seeds that EPA actually exempted from registration and mandatory labeling requirements under our pesticide laws,” said Peter T. Jenkins, an attorney with the Center and report author. “Our review concludes EPA violated the law in carving out this massive exemption. Given that this is the most widespread use of any type of insecticides in the United States – ever – this unregulated situation must be stopped.”

The report makes numerous other policy recommendations to EPA to stem this approaching crisis, including:

Suspend neonicotinoid insecticide registrations due to their unreasonable adverse effects in aquatic ecosystems.

Comply with Section 7 of the Endangered Species Act in order to protect threatened and endangered aquatic-dependent species and their habitats.

Take action at the State and local levels to protect affected waters.

“EPA’s benchmarks for neonicotinoid toxicity are far too low and fail to consider the long-term chronic impacts that neonicotinoids have on these ecosystems, in addition to additive and synergistic effects. With strong and growing proof of such extensive contamination of waterways, EPA must take a much closer look at the cumulative and long-term impacts of these widely used chemicals,” said Walker.

Neonicotinoid products are applied on more than 150 million acres of crop land annually, with seed coatings being the most common form of application. The runoff from these products flows, both above and below ground, far beyond the agricultural fields, gardens, trees, lawns, and other areas where they are first applied. This leads to unintended effects on non-target species across a vast array of wetlands and water bodies. Neonicotinoids are slow to break down, causing them to build up in the environment, particularly water bodies, and endanger a wide range of beneficial species. Peer-reviewed studies from Holland already show that neonicotinoid water contamination correlates significantly with bird population declines and numerous other species are thought be at risk. There is also new science suggesting that sub-lethal exposure in agricultural landscapes could be even more damaging to pollinating species, particularly wild bees, than acute exposure.

The cost-effectiveness of neonicotinoid seed coatings has been challenged in recent years, indicating that their frequent use pushed by chemical companies is unnecessary. The influential 2014 CFS report “Heavy Costs” revealed that neonicotinoid coatings typically offer little, if any, benefit to farmers as far as crop yields, and cause widespread environmental and economic damage. Other recent studies – including by EPA itself – have reinforced CFS’s report.