The first study was performed after a group of local far 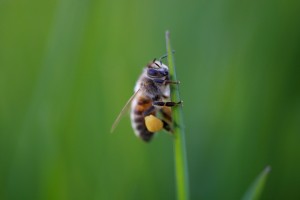 mers asked researchers at the University of Wisconsin to assess whether it was safe to spray fungicides on crops while they are in bloom and bees are foraging. Because insecticides, like neonicotinoids, are meant to kill insects, researchers have performed numerous studies on how the use of these insecticides may harm beneficial insects as well as those they are intended to target. Fungicides, however, are not meant to kill insects, so the relationship between their use and effects on bee populations is relatively unstudied.

Researcher Hannah Gaines Day, Ph.D., an entomologist at the University of Wisconsin, cautions that her team’s study, which involved five bumblebee colonies kept in field enclosures where flowers were sprayed with field-realistic doses of chlorothalonil, a common fungicide, was small and may not draw broad conclusions about the relationship between fungicides and bees. She notes that the diminished bumblebee colony size and health in her controlled study may not translate immediately to real-world colonies, but that it does indicate a relationship between the use of fungicides and health declines in bee populations.

These findings fit with patterns observed in another study, published in the June Proceedings of the Royal Society B by researchers led by Mia Park, Ph.D., a pollinator ecologist at the University of North Dakota. Dr. Park’s team found bees in New York orchards to be healthier on farms located within nature-rich areas rather than agriculture-intensive habitats. In the latter there were fewer bees, and fewer different species. Fungicides made “a significant contribution” to pesticide effects, wrote Dr. Park and colleagues, suggesting “deleterious properties of a class of pesticides that was, until recently, considered benign to bees.” In this study, wild bees were affected much more than honey bees and avoiding sprays during blooms didn’t seem to help. “Our findings suggest that heavy use of conventional pesticides, even some traditionally viewed as benign, can render our crops net sinks for bee populations,” the researchers wrote. More bees were killed than sustained and the health of wild pollinators were adversely affected in the process.

David Goulson, Ph.D., a bee biologist at the University of Sussex, said the new studies “suggest that the fungicides may be having more profound effects on bees than would have been expected from the standard lab toxicity studies.” The Park study in particular, said Dr. Goulson, “demonstrates very clearly how the cocktail of chemicals used in modern farming makes farmland an inhospitable place for bees.” Read more about Beyond Pesticides’ thoughts on Park’s study and what it means for pollinator populations here.

It is important to note that neither of the research groups investigated precisely how fungicides could harm bees, but one possible mechanism is described in a 2013 study by U.S. Department of Agriculture researchers, who found that fungicides rendered honey bees more vulnerable to parasites, perhaps because their immune systems are weakened. The studies also failed to assess the potential interactions between fungicides and other chemicals. Fungicides like those used in Gaines-Day’s experiment can short-circuit bees’ natural ability to detoxify some pesticides. “A quick look at a fungicide bottle might show minimal risks,” said Aimee Code, pesticide program coordinator at Xerces Society for Invertebrate Conservation, “but if mixed with some insecticides, the synergistic effects can be staggering.”

This new information, though far from complete, offers yet another look at the dangers pesticide use poses to bee populations. Evidence that fungicide use, in addition to neonicotinoid use, is linked to declining pollinator health highlights the shortfalls of available research and the uncertainties surrounding the long term effects of pesticide use and their role in pollinator declines. As the U.S. Environmental Protection Agency and other government entities continue to fall short in protecting pollinators, Beyond Pesticides once again advocates for a regulatory approach that prohibits high hazard chemical use and requires alternative assessments. We suggest an approach that rejects uses and exposures deemed acceptable under risk assessment calculations, and instead focuses on safer alternatives that are proven effective, such as organic agriculture, which prohibits the use of neonicotinoids.