PORTLAND, OR–(ENEWSPF)–March 21, 2014.  Business leaders and economic experts from Oregon and Washington yesterday urged Oregon Governor Kitzhaber to oppose proposed coal export projects in Oregon and called for a full economic analysis of proposals in the Northwest, citing the economic risks that the proposed terminals would have for local industry like agriculture, recreation, and fishing. Photos from the event can be seen below.

“Coal contains toxins like mercury and arsenic known to harm human health and dangerous diesel exhaust from barges and ships.   Ensuring that our product — mint — is fresh and free from dangerous contaminants is vital for our bottom line,” said Mike Seely, owner of Seely Mint in Columbia County. “We need a comprehensive analysis, including economic impacts, of these proposals so that farmers and other small business owners like me are protected.”

“Our restaurant employs almost 100 people, including many of my family members. We are proud to serve fresh, local produce and wines from along the Columbia Gorge. My family heritage is rich in agriculture and preparing food as a way to sustain life and livelihood. I am speaking out today because the effects of coal exports would be too costly and too risky for Oregon’s economy. We would pay the price while the coal companies would profit,” said Javier Hurtado, owner of Cha Taqueria in Portland, OR.

Along with the announcement from Oregon business leaders, Ecotrust released a new report entitled “Economic Risks of the Morrow Pacific Project: Livelihood, Habitat and Recreation,” which outlines the huge economic risks that Ambre Energy’s proposed Morrow Pacific coal export project would have for the regional economy. The report concludes, “far from being a ‘clean’ project, Morrow Pacific would jeopardize vital, valuable economic, cultural and ecological resources throughout Western Oregon.”

“The Morrow Pacific project places over $2 billion in natural and cultural assets at risk, including salmon habitat, recreational values and water quality. These risks to livelihoods, natural resources and economies must be studied further before an informed decision can be made. The project’s job numbers must be weighed carefully against these negative impacts, only some of which can be predicted from existing data,”  said Noah Enelow, PhD, an economist with Ecotrust and author of the report.

“Upwards of $625 million is spent on recreation in the Gorge. Bringing coal trains and barges through our region poses a huge threat to the recreation and tourism economy we depend on for our livelihoods. As a business owner who would be directly impacted by these projects, I have a right to know the full cost of coal before any permits are issued,” said Mike Kitts, an entrepreneur and affordable housing developer from Hood River.  “We want the Governor to release a full-scale study of the economic impacts of coal exports” he concluded.

They also called on the states of Oregon and Washington to perform an Economic Impact Study that evaluates the costs and economic risks associated with coal exports.

“My office in Spokane is just half of a block from the railroad tracks.  From this project alone, we would see four additional coal-dust and diesel-spewing mile plus long noisy coal trains each day, on top of all of the other current trains and proposals. While the other export terminals are undergoing substantial review, no one is looking at the impacts to our communities in Washington, Idaho and Montana from this proposal,” said Dennis Todaro, a Spokane-based financial planner who joined with Oregon business leaders to highlight the risks from train traffic from the Port of Morrow proposal, and to speak on the investment risk associated with coal exports. “We need both the states of Washington and Oregon to conduct in-depth studies to ensure we can know the cost-analysis and risks associated with coal trains and barges in our communities. Furthermore, I have spent 30 years in financial planning and stock investing. I’ve seen business trends come and go. I look at this and see that coal is an industry on its way out”

Close to 600 Northwest businesses and business leaders have either expressed concern or outright opposition to coal export.

The business leaders’ event comes on the heels of recent the State of Oregon notified Ambre Energy that its controversial proposed coal export terminal is located on state-owned land in the Columbia River and now requires a state land lease.  On Friday the 14th, the Oregon Department of State Lands (DSL) sent a letter to Ambre Energy alerting the company that its proposed Morrow Pacific coal export project requires aquatic land leases both at Port of Morrow and Port Westward, the upstream and downstream ends of the project. The requirement to obtain a state land lease for Ambre Energy’s coal export project is yet another setback to the struggling coal export terminal.

Ambre Energy has been plagued by financial questions and has made little progress in obtaining state or federal permits.  Just last month, the Oregon Department of Environmental Quality (DEQ) announced Ambre Energy’s proposal to build Oregon’s first coal export terminal will require an additional permit, known as a 401 Water Quality Certification. DEQ received a record breaking 16,500 public comments on Ambre’s proposal to export 8.8 million tons of coal through Northwest communities and along the Columbia River.  The agency also announced its decision to issue three permits for the coal export project, an air quality permit, a construction storm water permit, and an internal wastewater permit.

Ambre Energy also needs approval from the Oregon Department of State Lands (DSL) before it can build an industrial coal dock on the Columbia River. To date, the company has failed to provide adequate information requested by the DSL, resulting in six permit extensions from the agency. Business leaders urged Governor Kitzhaber and the Oregon Department of State Lands to deny the removal-fill permit at the Port of Morrow this April.

PDF Download of the full Ecotrust report HERE.   Pictures and full audio of the news conference available on request. 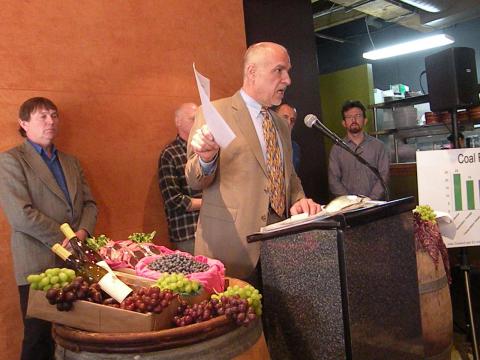 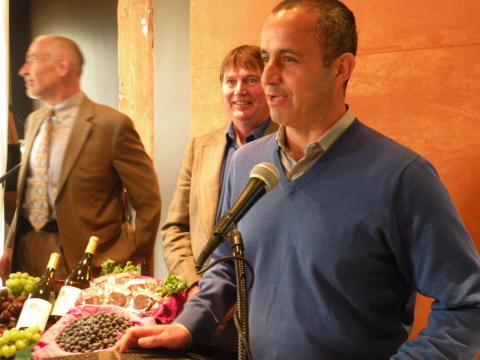 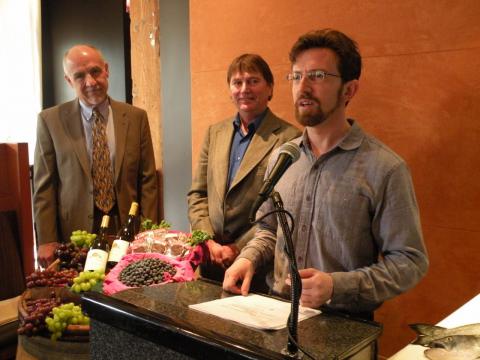