Washington, DC–(ENEWSPF)–October 23, 2015.  NASA satellites and instruments have been monitoring the record-breaking Hurricane Patricia as it rapidly intensified off the southwestern coast of Mexico on October 23. NASA-NOAA’s Suomi NPP saw frigid cloud top temperatures, NOAA’s GOES-West satellite provided imagery and animations that showed the extent of the storm, NASA’s Terra satellite provided visible data, and the RapidScat instrument aboard the International Space Station measured its surface winds. 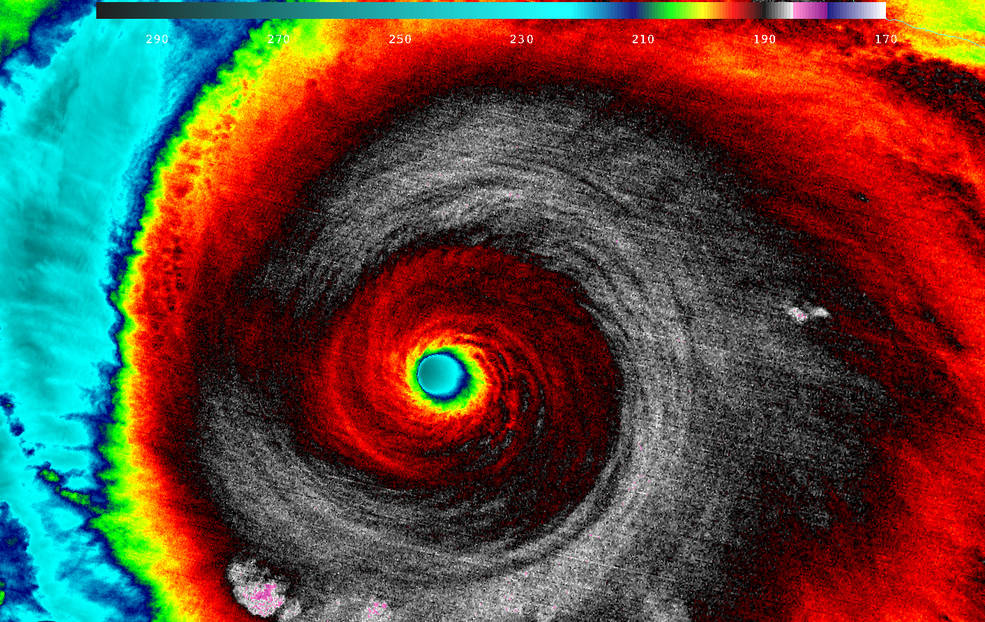 When NASA-NOAA’s Suomi NPP satellite passed over Patricia on October 23 at 5:20 a.m. EDT the Visible Infrared Imaging Radiometer Suite or VIIRS instrument that flies aboard Suomi NPP looked at the storm in infrared light. “Cloud top temperatures of thunderstorms around the eyewall were between 180K (-135.7F/ -93.1C) and 190 Kelvin (-117.7F/ -83.1C),” said William Straka III of the University of Wisconsin, Madison. “Then, as you go into the eye itself, it gets warmer.”

The higher the cloud tops, the colder they are as temperatures get colder with altitude in the troposphere. Storms with cloud top temperatures that cold have the capability of generating heavy rainfall.

On October 22, Patricia was a Category one hurricane. By 8 a.m. EDT on October 23, 2015, the National Hurricane Center reported Patricia became the strongest eastern north pacific hurricane on record with sustained winds near 200 mph.

An animation of images captured from October 20 to 23 from NOAA’s GOES-West satellite showed Hurricane Patricia intensify within 24 hours and develop a clear eye near the coast of western Mexico.  The animation was created at NASA/NOAA GOES Project at NASA’s Goddard Space Flight Center, Greenbelt, Maryland. 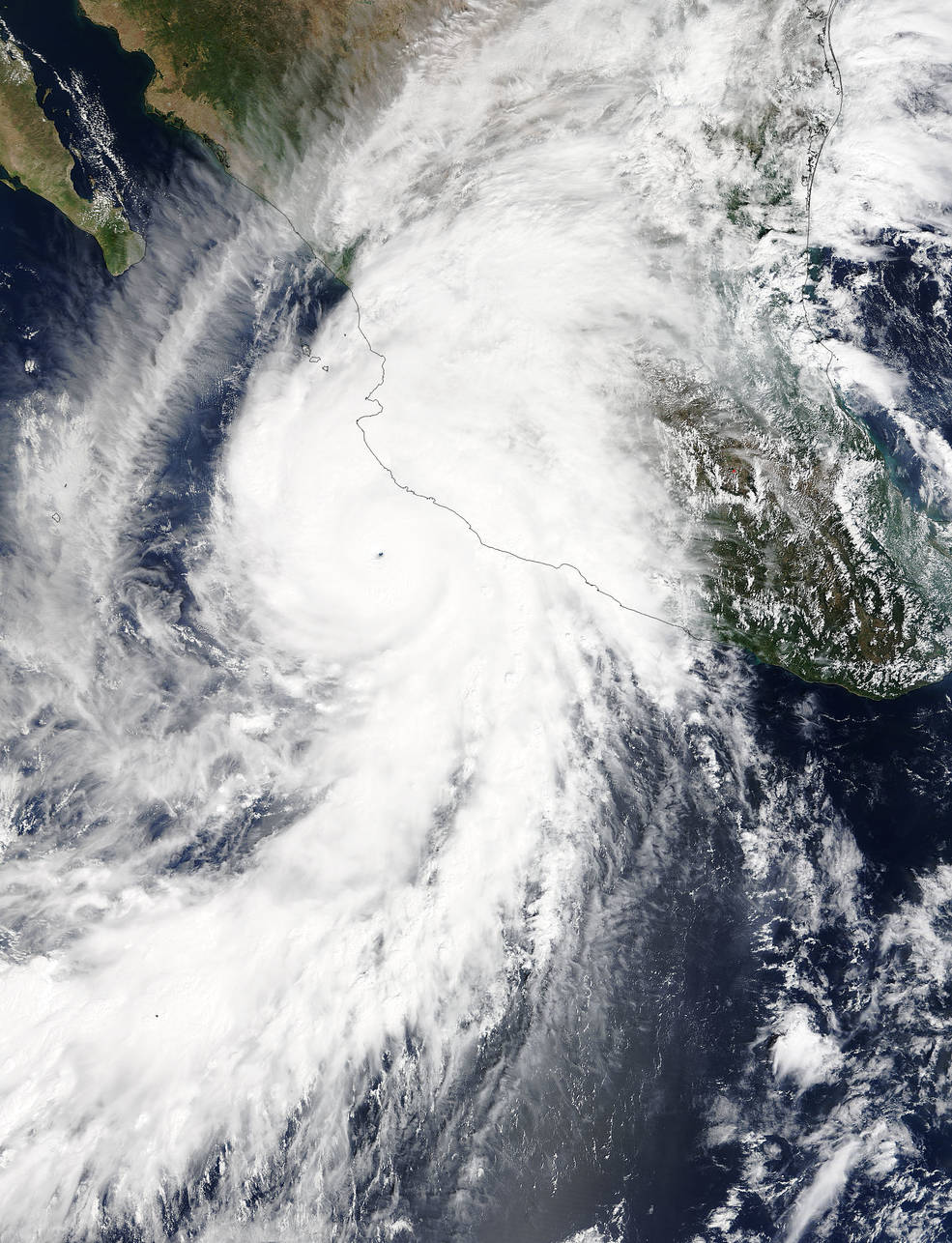 On Oct. 23 at 17:30 UTC (1:30 p.m. EDT) the Moderate Resolution Imaging Spectroradiometer instrument aboard NASA’s Terra satellite saw the eastern quadrant of Hurricane Patricia over Mexico and the storm’s pinhole eye. 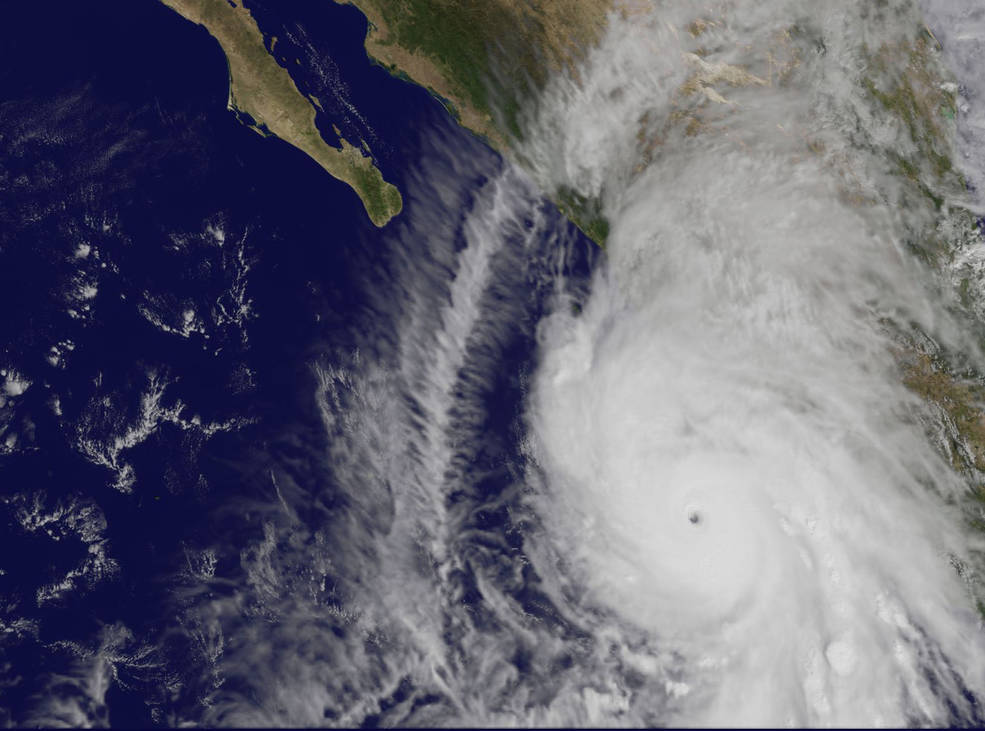 This visible image of Hurricane Patricia was taken from NOAA’s GOES-West satellite at 1745 UTC (1:45 p.m. EDT) as it headed for landfall along the western coast of Mexico. Credits: NASA/NOAA GOES Project

Status of Hurricane Patricia on October 23 at 2 p.m. EDT

Reports from a NOAA Hurricane Hunter aircraft indicate that maximum sustained winds remain near 200 mph (325 kph) with higher gusts. Patricia is a category 5 hurricane on the Saffir-Simpson Hurricane

Landfall Expected at Night, October 23/Early October 24 as a Category 5

Forecaster Beven of the National Hurricane Center stated in a discussion that Patricia is expected to make landfall as a Category 5 hurricane in southwestern Mexico in less than 12 hours.  After landfall, a combination of the mountainous terrain of Mexico and increasing shear should cause the cyclone to rapidly weaken, with the system likely to dissipate completely after 36 hours.

Despite dissipation, the National Hurricane Center said that development of another low pressure area is expected to draw significant amounts of moisture from Patricia’s remnants, and could result in locally heavy rainfall over portions of the northwestern Gulf of Mexico coastal area within the next few days.