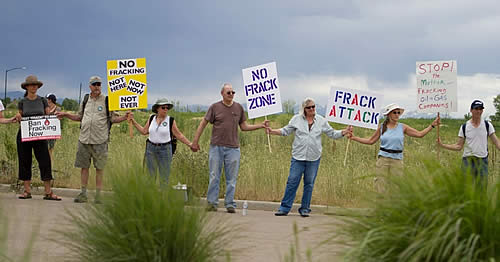 Washington, D.C.-(ENEWSPF)- In what is being slammed as a hijacking of the democratic process—and a cave to pressure by the oil and gas industry—top Colorado democrats have pulled two anti-fracking initiatives from the state’s November ballot despite huge grassroots support behind the proposals.

On the day Rep. Jared Polis (D-Colo.) was expected to hand in nearly 300,000 signatures in favor of ballot initiatives 88 and 89, which sought to provide greater local control over fracking operations, he announced that he had dropped support for the measures in favor of a deal brokered by Democratic Gov. John Hickenlooper. Instead of allowing citizens to vote on shale oil and gas drilling in their communities, the politicians announced during a joint press conference that they are establishing a task force—led by XTO Energy President Randy Cleveland and taking input from business groups along with the oil and gas industry—that will craft drilling regulations.

Polis’ about-face met with immediate condemnation from residents who supported the measures.

“We are outraged to see politicians once again prioritizing political expediency over the health and well being of Coloradans. The proposed compromise represents a failure on the part of both Polis and Hickenlooper to protect Coloradans from the dangers of fracking,” said Russell Mendell of Frack Free Colorado.

Local environmentalists responded with an open letter to Polis, charging, "Your actions prove that we not only have an environmental crisis, but also a democracy crisis."

[W]e made it clear that we expect our right to “clean air, pure water and natural and scenic values” to be represented in the Colorado Constitution. And we expect that our local governments are there to protect us. By withdrawing these initiatives, you also withdrew the voice of Coloradans.

You have said, in essence, that ‘we the people’ should not have the right to protect our communities from fracking. You, left us naked and unarmed to protect ourselves from what, by default, are non-sensible regulations which violate rights to safety. In Colorado we have 52,000 active oil and gas wells, 74,000 abandoned wells, 13 inspectors, 500 spills a year. That’s two a day now, Jared.

Demanding the right to bring the anti-fracking initiatives to a vote, the letter concludes, "The democratic process is not yours to steal. It, like Colorado’s environment, is the common property of all Coloradans."

The proposed legislation would have forbade any fracking operations from within 2000 feet of schools, hospitals and other community facilities, and established an environmental bill of rights allowing local governments precedence when laws conflict with the state.

After Polis announced he had dropped his support of the measures—which he paid millions of his personal money to fund—the signatures were in fact submitted to the secretary of state’s office by the group responsible for the signature gathering, Coloradans for Safe and Clean Energy. However, after news that two industry-backed measures were pulled, the group announced they too would support the compromise and withdraw the initiatives, The Hill reports.

The industry-supported initiatives, 121 and 137, would have restricted towns that banned fracking for natural gas from receiving tax revenues from oil and gas development.

After Monday’s press conference, Sen. Udall issued a statement saying he "applauded" the compromise, adding that it is "welcome news and underscores how all of Colorado benefits when we find common ground."

However, the outrage over the "eleventh-hour deal" came swiftly as grassroots groups and regional anti-fracking activists vowed to keep up the fight regardless of the political flip-flop of top Democrats.

Sam Schabacker, regional director for Food & Water Watch said that the "hollow" compromise "will not protect Colorado communities, does not promote real local control, and will not make fracking any less of a hazard for our water, our air and our health."

"It’s a sad day when politicians subvert the will of the people,” added Karen Wagner of Citizens for a Healthy Fort Collins. “We will continue to fight the toxic industry that puts our families and communities at risk."

“This is further evidence that real progress cannot come from the top down, and true change will continue to come from citizen, grassroots organizing," said  Mendell of Frack Free Colorado.  Mendell added that the deal "only strengthens our resolve to work in our communities for real citizen initiatives that will ensure a safe and healthy future for all Coloradans."

Adding his voice to the chorus, 350.org founder Bill McKibben tweeted: "When 300,000 people stand up, politicians should listen."

This work is licensed under a Creative Commons Attribution-Share Alike 3.0 License