Washington, DC–(ENEWSPF)–November 23, 2015.  Commonly-used pesticides can impact aquatic species over multiple weeks, even when chemicals are no longer detectable in water nor monitored by regulators, according to new research. The study, titled A long-term assessment of pesticide mixture effects on aquatic invertebrate communities, published in the journal Environmental Toxicology and Chemistry, investigates the long-term effects on aquatic invertebrate communities of commonly-used insecticides: two pyrethroids (permethrin and lambda-cyhalothrin) and an organophosphate (chlorpyrifos). Pesticide applications were based on environmentally relevant concentrations and lethal concentrations (a concentration required to kill a certain percentage of animals tested) ranging from 10% (LC10) to 50% (LC50). Researchers made repeat applications in order to mimic runoff events in a multiple grower or homeowner watershed. The results indicate that insecticide mixtures continue to impact natural systems over multiple weeks, even when bound to particles and no longer detectable in water. Combinations of indirect and direct effects caused consequences across the food chain. Pyrethroids rapidly dissipated from the water column, whereas chlorpyrifos was detectable even six weeks after application. 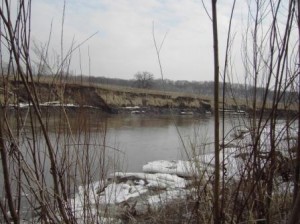 “The effects we observed indicate that many species were affected at a sublethal level,” said Simone Hasenbein, Ph.D., lead author of the study tells Phys.org. “Thus, populations exposed to low concentrations of pesticides could  be even more sensitive to other abiotic or biotic factors, such as invasive species, or changes in salinity or temperature leading to a magnification of multi-stressor situations.”

Over half a billion pounds of pesticides are used annually in the U.S., mostly in agriculture and to reduce insect-borne disease, but some of these pesticides are occurring at concentrations that are identified by the government as a concern for aquatic life. The potential for adverse effects on aquatic life is likely underestimated in these results because resource constraints limit the scope of monitoring to less than half of the more than 400 pesticides currently used in agriculture each year and monitoring focuses only on pesticides dissolved in water.

Already, nearly 2,000 waterways are impaired by pesticide contamination and many more have simply not been tested. A U.S. Geological Survey (USGS) report from last year finds that levels of pesticides continue to be a concern for aquatic life in many of the nation’s rivers and streams in agricultural and urban areas. The study, which documents pesticide levels in U.S. waterways for two decades (1992-2011), finds pesticides and their breakdown products in U.S. streams more than 90 percent of the time. Known pesticide water contaminants, such as the herbicides atrazine, metolachlor, and simazine, continue to be detected in streams more than 50 percent of the time, with the insecticide fipronil being the pesticide most frequently found at levels of potential concern for aquatic organisms in urban streams. The report also found that for urban areas, 90 percent of the streams exceeded a chronic aquatic life benchmarks.

Aquatic organisms like algae and fish face numerous risks from pesticide exposures, even at low levels. In fact, USGS scientists identified pesticides as one of the contaminants the Potomac River linked to intersex-fish (male fish producing eggs) observed there. Atrazine, one of the most commonly used herbicides in the world, has been shown to affect reproduction of fish at concentrations below U.S. Environmental Protection Agency’s (EPA) water-quality guidelines. Concentrations of atrazine commonly found in agricultural streams and rivers have been associated with a reduction in reproduction and spawning, as well as tissue abnormalities.

Last year, EPA finalized a settlement to restore no-spray buffer zones around waterways to protect imperiled salmon and steelhead from five toxic pesticides. The settlement follows litigation filed by Earthjustice, representing the Pacific Coast Federation of Fishermen’s Associations, the Northwest Coalition for Alternatives to Pesticides, and Defenders of Wildlife, back in 2010 that called for EPA adoption of reasonable fish protections from the insecticides. More recently, EPA proposed to revoke all food tolerances for chlorpyrifos (also known as Dursban). If EPA’s rule is finalized, chlorpyrifos would be effectively eliminated from use in agriculture 15 years after residential uses were discontinued. However, other non-food uses, including golf courses, turf, green house and mosquito control are not affected by this decision and will remain.

Water quality criteria for the protection of aquatic life and human health in surface water are set for only a handful of pesticides. In 2012, EPA added new health and environmental benchmarks for acute pesticide effects, however, benchmarks are notoriously limited in fully assessing risks because of ongoing deficiencies in analyzing the complexities associated with chemical exposure, specifically a failure to evaluate the effects of chemical mixtures, synergistic effects, and health effects associated with consistent low-dose exposure. If benchmarks are exceeded, the state or local water municipality can consider how frequently the benchmarks are exceeded and the magnitude of the exceedance in other samples. Exceeding the benchmark consistently means that aquatic life and human health may be at risk from continued exposures.

Clean water is essential for human health, wildlife, and a balanced environment. Check out Beyond Pesticides’ Threatened Waters webpage for more information.