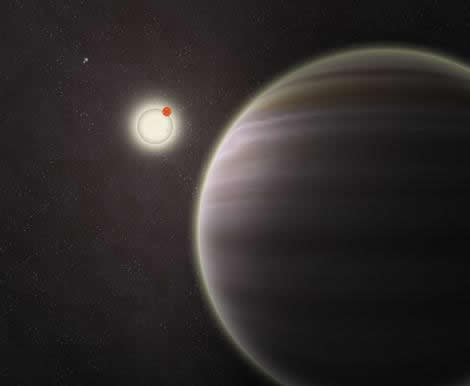 An artist’s illustration of PH1, a planet discovered by volunteers from the Planet Hunters citizen science project. PH1, shown in the foreground, is a circumbinary planet and orbits two suns. Image Credit: Haven Giguere/Yale.

UK–(ENEWSPF)–16 October 2012. For the first time a planet has been found that orbits one pair of stars and has a second pair of stars revolving around it – so that four stars illuminate its skies.

The discovery was made by volunteers using the Planethunters.org website alongside a team led by astronomers from Oxford University, Yale University, and Adler Planetarium.

Whilst binary stars – systems with pairs of stars – are not uncommon, out of the thousands of planets discovered outside our solar system only seven of these have been found to orbit binary stars (circumbinary planets) and none of these are known to have another pair of stars circling them.

The planet, dubbed ‘PH1’ after the Planethunters.org website, is thought to be a ‘gas giant’ slightly larger than Neptune but over six times the size of the Earth, located just under 5,000 light-years away. Quite how such a four star system remains stable enough not to tear PH1 apart is a mystery.

‘It’s fascinating to try and imagine what it would be like to visit a planet with four Suns in its sky, but this new world is confusing astronomers – it’s not at all clear how it formed in such a busy environment,’ said Dr Chris Lintott, of Oxford University, one of the Planethunters.org team.

The planet was discovered by two US volunteers using the Planethunters.org website: Kian Jek of San Francisco and Robert Gagliano from Cottonwood, Arizona, spotted faint dips in light caused by the planet passing in front of its parent stars. The team of professional astronomers then confirmed the discovery using the Keck telescopes on Mauna Kea, Hawaii.

Meg Schwamb of Yale University, lead author of an upcoming paper on the discovery, is presenting the results on 15 October at the Division for Planetary Sciences annual meeting in Reno, Nevada. She said: ‘The discovery of these systems is forcing us to go back to the drawing board to understand how such planets can assemble and evolve in these dynamically challenging environments.’

Arfon Smith of Adler Planetarium, one of the Planethunters.org team, said: ‘It’s an amazing discovery, but what’s even more exciting is that, with more data currently being added to Planethunters.org for anyone to explore, we really don’t know what our armchair astronomers will discover next!’

Kian Jek said: ‘It still continues to astonish me how we can detect, let alone glean so much information, about another planet thousands of light years away just by studying the light from its parent star.’

Robert Gagliano said: ‘It’s a great honour to be a Planet Hunter, citizen scientist, and work hand in hand with professional astronomers, making a real contribution to science.’

An illustration of the planet is available at: http://www.ox.ac.uk/images/hi_res/15740_Four_star_planet_1.jpg

An illustration of the star is available at: http://www.ox.ac.uk/images/hi_res/15741_Four_star_planet_2.jpg