Portland, OR to Protect Pollinators, Bans Use of Bee-Toxic Pesticides

Washington, DC–(ENEWSPF)–April 6, 2015.  Last week, the city council of Portland, Oregon voted unanimously to ban the use of neonicotinoid insecticides on city-owned property because these pesticides are persistent in the environment, harmful to pollinators, and have been involved in acute bee kills in other areas of the state. 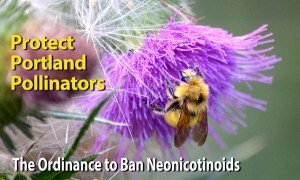 Neonicotinoids affect the central nervous system of insects, resulting in paralysis and eventual death. These pesticides have consistently been implicated as a key issue in pollinator declines, not only through immediate bee deaths, but also through sublethal exposure that causes changes in bee reproduction, navigation, and foraging. The science has become increasingly clear that pesticides, either working individually or synergistically, play a critical role in the ongoing decline of honey bees.  Pesticide exposure can impair both detoxification mechanisms and immune responses, rendering bees more susceptible to viruses, parasites, and other diseases, and leading to devastating bee losses.

Portland’s ordinance was spurred in part by the 2013 deaths of tens of thousands of bees as a result of the improper use of the neonicotinoids. Last month state officials banned  four  of the bee-killing insecticides, including  imidacloprid, clothianidin, thiamethoxam and dinotefuran from use on  Linden  trees. In addition to banning the use of neonicotinoids on city property, the ordinance urges private retailers to label any product that may contain these toxic chemicals.  “We’re doing another good thing for the people of Portland, Oregon, the United States, maybe the entire world,” Commissioner Amanda Fritz, who introduced the policy,said to The Oregonian. However, the ordinance does not immediately apply to two rose gardens in the city. A “pilot program” will be run to find alternatives to using neonicotinoids to kill rose midges, a difficult pest to manage. The city has until December 2017 to come up with a sufficient alternative.

Portland’s ordinance to ban neonicotinoids on city-owned property follows numerous other communities that have taken steps toward creating a safer habitat for pollinators and a healthier environment. In 2014, Eugene, Oregon became the first community in the nation to specifically ban the use of neonicotinoid pesticides from city property. Eugene had previously set up a pesticide-free parks program and required all departments to adopt integrated pest management (IPM) standards. Other communities passed similar bans, such as Skagway (Alaska), Shorewood, Minnesota and, in Washington State, Thurston County, Seattle, and Spokane. Even school campuses have joined in, with the University of Vermont Law School becoming the first BEE Protective campus after announcing that it was going neonicotinoid pesticide-free. At Emory University, the Office of Sustainability Initiatives not only banned neonicotinoids on campus, but also went a step further by planting pollinator habitats and conducting campus outreach and education on the importance of pollinators. These restrictions on neonicotinoids are especially important because they build pressure at the federal level, and demonstrate to other communities and cities across the country that there are ways to create positive environmental change with their own local actions.

In 2014, President Barack Obama signed a Memorandum that recognizes the severe losses occurring in the nation’s pollinator populations, including honey bees, wild bees, monarch butterflies, and others. In accordance with these losses and acknowledging the importance of pollinators to the agricultural economy, the memorandum directs federal agencies to establish a Pollinator Health Task Force, and develop a pollinator health strategy within 180 days that supports and creates pollinator habitat, and works to reverse these unsustainable pollinator declines. In 2015, Beyond Pesticides, along with many other environmental organizations, rallied in front of the White House to deliver more than 4 million petition signatures calling on the Obama administration to put forth stronger protections for honeybees and other pollinators.

Last week, the Environmental Protection Agency (EPA) announced a moratorium on any new neonicotinoids, which pose a threat to bees or birds. Although the decision was welcome news, demonstrating that EPA is acknowledging the impact that neonicotinoids have on our pollinators, it was a tempered victory for environmental advocates. This announcement does nothing to address the toxic neonicotinoids that are already on the market, nor other bee-toxic systemics that have recently been registered by the agency. Farmers, beekeepers, and environmental groups have urged EPA to consider suspending these dangerous products that have already been approved for use. Groups expect EPA’s announcement to foreshadow broader recommendations from the White House Pollinator Health Task Force, which is why they say it is so important to urge the Obama administration to develop a strong plan for combating the dangers that neonicotinoids pose to our pollinators, the food supply and world.

Take action.
You too can make a difference! If you are interested in supporting efforts to save honey bees, go to save-bees.org and sign the petition. You also can work to get bee-toxic neonicotinoids out of your community. It takes a lot of work and commitment, but it can be done with some perseverance. It’s important to find support –friends, neighbors, and other people who share your concerns about environmental health. It’s also essential to reach out to your local politicians and government .Beyond Pesticides has resources and factsheets available to help you organize in your community. You can also call (202-543-5450) or email ([email protected]) for one-on-one consultation about the strategies you can take to have an impact.

Sources: The Oregonian, Beyond Toxics, www.beyondpesticides.org