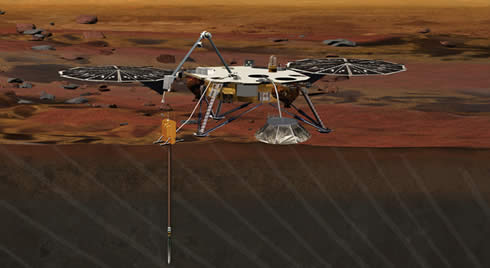 InSight stands for Interior Exploration using Seismic Investigations, Geodesy and Heat Transport and is a partnership involving JPL, Lockheed Martin Space Systems, the French Space Agency (CNES), the German Aerospace Center (DLR), and other NASA centers. The previous name for the proposal was GEMS (GEophysical Monitoring Station). NASA requested that name be reserved for an astrophysics mission known as the Gravity and Extreme Magnetism Small Explorer, which was already in development.

"We chose the name InSight because we would literally peer into the interior of Mars to map out its structure," said JPL’s Bruce Banerdt, the principal investigator. "With our geophysical instruments we will be able to see right through to the center of Mars, and will be able to map out how deeply the crust extends as well as the size of the core."

InSight is one of three missions vying to be selected for flight in the Discovery Program, a series of NASA missions to understand the solar system by exploring planets, moons, and small bodies such as comets and asteroids. All three mission teams are required to submit concept study reports to NASA on March 19.