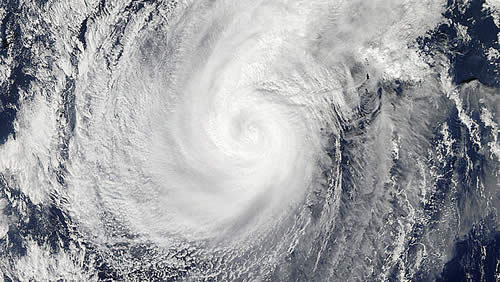 AccuWeather.com-(ENEWSPF)- AccuWeather.com reports  a powerful storm is slated to move over the Bering Sea this weekend, possibly becoming one of the most intense storms to ever impact the region.

The former Super Typhoon Nuri is forecast to track northward into the Bering Sea, located in between Alaska and Russia, on Friday, losing its tropical characteristics as it does so.

At this point, the system will undergo rapid intensification, producing howling winds as the central pressure plummets to near record levels.

Due to the massive size of the storm, impacts can be felt hundreds of miles away from the storm’s center through much of the weekend.

Large waves and hurricane-force winds are expected to be the highest impacts with waves in some areas topping 45 feet Friday night and into Saturday.

Waves this large can quickly turn deadly, tossing around ships sailing in the area.

Waves and swells are not expected to be nearly this high along the west coast of Alaska. However, they may still be strong enough to cause flooding and erosion in coastal areas.

The Aleutian Island Chain will likely feel the worst impacts as wind-swept rain moves in late on Friday, continuing through much of the weekend. Peak wind gusts across the islands can occasionally gust beyond 100 mph.

AccuWeather.com meteorologists believe that this system could become one of the most intense storms to move over the Bering Sea.

The central pressure of this system is forecast to drop below 930 millibars on Friday night.

To put this in perspective, the lowest pressure recorded in Hurricane Sandy was 940 millibars.

If the pressure of this storm does drop this low, it will be in contention for becoming one of the most powerful storms to ever develop over the Bering Sea in recorded history in terms of central pressure.

The current record stands at 925 millibars from a powerful storm that moved over the Bering Sea on Oct. 25, 1977.

This storm will not only have impacts on Alaska, eastern Russia and the Bering Sea, but also the contiguous United States.

According to Senior Meteorologist Brett Anderson, “In brief, when a typhoon curves away from Asia it causes the jet stream [steering winds] farther to the east across the Pacific and into North America to buckle and amplify days later.”

This is the case for the remnants of Super Typhoon Nuri as it has already curved away from Asia and tracking northward toward Alaska.

As a result, arctic air is expected to invade the Plains, Midwest and Northeast next week.