Washington, DC–(ENEWSPF)–December 17, 2015.  On September 25, Applebee Aviation’s license to spray pesticides commercially was suspended for one year, after an employee complained of chemical exposure and violated worker protection rights. After Applebee Aviation’s one-year suspension was issued, it continued to operate and illegally sprayed at least 16 sites, according to reports. Two of those sites were public parks, 71 acres in total, overseen by the Oregon Department of Forestry (ODF). 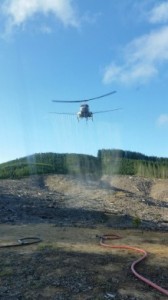 A series of back-and-forth communications between the Oregon Department of Agriculture and Applebee Aviation has resulted in a restraining order, $180,000 in fines, a five-year license revocation, and over 800 acres of state
and private land illegally sprayed. According to recent investigations, ODF knew about the license revocation before Applebee Aviation illegally sprayed state forests.

In April 2015, Applebee Aviation employee Darryl Ivy, a truck driver, spent 17 days on a spray crew in Oregon timber country. During that time, he and his crew were routinely exposed to aerial sprays. Mr. Ivy took shelter in his truck while a “milky chemical mixture” rained overhead and stained his vehicle. In the emergency room, Mr. Ivy’s urine showed elevated levels of the herbicide atrazine, a known endocrine disruptor. He suffered from sores and rashes and was spitting up blood. Before going to the hospital, however, Mr. Ivy managed to capture videos and photos of the spraying. Those videos were submitted to the Oregon Occupational Safety and Health (OSHA) and the Department of Agriculture (ODA), which on September 25, fined Applebee $8,850 and $1,100 respectively, citing a total of 22 “serious violations” related to herbicide exposure. According to the OSHA report, “The company did not provide emergency eye wash or decontamination, proper information and training, or protective equipment.”

In the 16 days that followed the suspension, it has been reported that Applebee illegally sprayed 16 different sections of forest, including a state park spray overseen by Charlie Moyer, a department district forester. According to the report, the sprays were authorized by Applebee Aviation owner, Michael Applebee, who directed his employees to disregard the suspension. State attorneys representing the Department of Agriculture responded by obtaining a restraining order against Applebee to prevent further violations.

According to a local radio station, “On October 7, just after 11 a.m., Lisa Arkin of the anti-pesticide group Beyond Toxics sent an email to agriculture and forestry officials asking why Applebee Aviation was still listed on upcoming forestry jobs. Ms. Arkin copied several state legislators and the governor’s office on the message. ‘It doesn’t seem like the right hand knows what the left hand is doing,’ Ms. Arkin later said in a phone interview.”

On November 5, ODA revoked Applebee Aviation’s commercial pesticide operator license and fined the company and its owner a total of $180,000. “Issuing $180,000 in civil penalties and five-year license revocations against Applebee Aviation underscores how serious the Oregon Department of Agriculture considers the violations that have taken place,” says ODA Director Katy Coba.

“We take all violations of the state’s pesticide law seriously. The fact that this operator knowingly and willfully continued to conduct pesticide applications 16 times after receiving a suspended license shows contempt for state regulations and our department. We cannot and will not tolerate such disregard for the law by which all pesticide operators are expected to live by.”

Michael Applebee told local media that he was being used as a scapegoat. “People from Eugene south do not like pesticides,” Mr. Applebee said. “If there’s a problem with pesticides and people don’t want it, we should figure out what to do about it — not beat down on Mike Applebee.”

Now, media, environmentalists, and lawmakers are looking to recent investigations, which found that ODF officials knew Applebee had lost its license before state and private land were sprayed. According to the ongoing investigation, notification of the suspension seems to have been delayed or forgotten. Reports are unclear as to whether state agencies notified state officials by phone or emails and whether the timing of that communication resulted in illegal sprays.

Applebee Aviation is the center of multiple investigations. Since 2010, Applebee Aviation has had 15 complaints filed against it, more than any other chemical applicator in the state. In August, an Applebee Aviation chemical delivery truck crashed and spilled 500 gallons of water containing glyphosate residue as well as diesel fuel just off Highway 199 in Northern California, along the Smith River. Mr. Ivy had previously reported to authorities that Applebee did not properly maintain the brakes and pesticide tank seals on their trucks. In November, a fifth Applebee Aviation helicopter in five years crashed during a Christmas tree harvesting operation.