Washington, DC–(ENEWSPF)–March 11, 2014.  Virtually all lice in the U.S. have developed resistance to over-the-counter and prescription shampoos containing the toxic chemical permethrin. The U.S. Environmental Protection Agency’s Office of Pesticide Programs considers permethrin, part of the synthetic pyrethroid class of chemicals, “likely to be carcinogenic.” However, when used as a lice shampoo the chemical is regulated by the Food and Drug Administration and allowed for use on infants over two months old. The latest study on lice resistance, published in the Journal of the Entomological Society of America, shows that harsh chemical treatments not only are not necessary given effective least-toxic alternatives, but also are not able to provide the lice control that manufacturers claim. 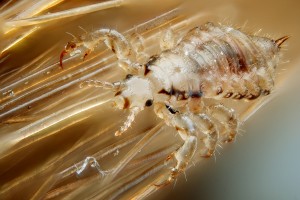 d Europe, they don’t even use pyrethroids anymore. Virtually everyone but the United States and Canada has given up using these over-the-counter products,” said Dr. John Clark, PhD, a professor of environmental toxicology and chemistry at the University of Massachusetts Amherst and co-author of the new study.

In an interview with the Detroit Free Press, Eric Ayers, MD of the Children’s Hospital of Michigan noted that lice that are not killed by the chemical treatment not only survive, but become stronger. “The more a product is used within a community, the more lice in that community become resistant,” said Shirley Gordon, PhD, director of the Head Lice Treatment and Prevention Project at Florida Atlantic University. “We don’t like to use the term super lice, because it’s sensational and frightening. It’s not a superbug, but a louse that has become resistant.” According to the latest study, 99.6% of lice tested between 2007-2009 would be considered “super.”

A greater concern than “super” lice resistant to these chemicals is the use of these harsh products in the first place, especially on infants and children. A 2009 study, Pesticide exposure resulting from treatment of lice infestations in school-aged children in Georgia, found that children treated with common chemical lice shampoos containing permethrin and the organophosphate lindane showed levels of the chemical’s metabolites up to seven days after the first treatment. This is especially concerning given that environmentally relevant levels of pyrethroids are also common in many homes, where they are used as a household insecticide. Young children who play on the floor can come into chronic contact with these chemicals through skin or hand to mouth activities. A 2013 study, Urinary metabolites of organophosphates and pyrethroid pesticides and behavioral problems in Canadian children, found that high levels of pyrethroid metabolites correlated with a two-fold increase in parent-reported behavioral problems, including inattention and hyperactivity. These chemicals can also damage children before they are born.  A 2013 study, In utero pesticide exposure and leukemia in Brazilian children less than 2 years of age,” found that a mother’s exposure to permethrin at any time raised the cancer risk for infants. A 2006 study, Household exposure to pesticides and risk of childhood acute leukaemia, also found an association between the use of lice shampoo and childhood leukemia. A 2012 study, Prenatal exposure to pesticide ingredient piperonyl butoxide and childhood cough in an urban cohort, indicated that exposure to synthetic pyrethroids like permethrin in combination with piperonyl butoxide, a chemical often added to pesticide formations and lice shampoos as a synergist to enhance the toxicity of active ingredients, “…may be a factor in a very common problem for children – cough,” according to co-author Rachael Miller, MD.

There are a number of alternative lice treatment methods that do not include the use of toxic chemicals. According to researchers on alternative lice treatments, one method for eliminating head lice that will not lead to resistant strains of lice is the use of hot air, which desiccates the insects and eggs, killing them. In fact, recent research shows that the extra chemicals in lice shampoo are completely unnecessary. Ordinary conditioners are just as effective at removing lice. “There were no significant differences in measured forces between the ordinary conditioner and the commercial nit removal product,” authors of a study published inthe Journal of Medical Entomology write. “The commercial nit removal products tested in the current study do not seem to have an additional effect.”

For additional information on controlling head lice without toxic chemicals, see Beyond Pesticides’ Head Lice Factsheet or Getting Nit Picky About Head Lice.