Snowstorm Parade to Continue in US Next Week 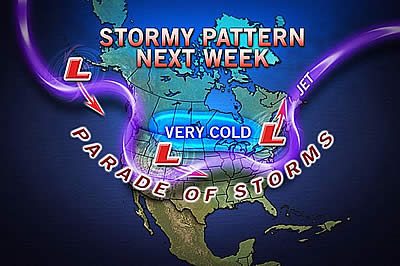 State College, PA-(ENEWSPF)- AccuWeather.com reports a major storm may come together to bring wind-whipped snow to the Upper Midwest and Great Lakes region early next week, while severe storms could ignite on the southern edge.

Minnesota, Wisconsin, Michigan, Illinois, Indiana and Ohio may get travel-disrupting snow from the storm during the Monday-Tuesday time frame of next week.

There is potential for snow to fall in Chicago, Green Bay, Indianapolis and Detroit. Gusty winds up to 40 mph could reduce visibility further and add to travel impacts from the storm.

On the back edge of the storm, some snow may even reach areas farther south such as St. Louis and Cincinnati.

By Tuesday night and Wednesday, the storm may swing across Canada, bringing snow from the northern mid-Atlantic and much of New England to Quebec. Again, gusty winds may accompany the round of snow, adding to travel disruptions.

Strong to severe storms may also be a threat along the southern edge of the storm; however, a limiting factor will be cold air that will surge south over this weekend. The cold air will flush out moisture that has been in place recently to fuel severe thunderstorms.

Southeastern Louisiana, Mississippi, Alabama and perhaps Tennessee may be in the path of damaging thunderstorms on Tuesday.

The parade of storms will continue through late next week.