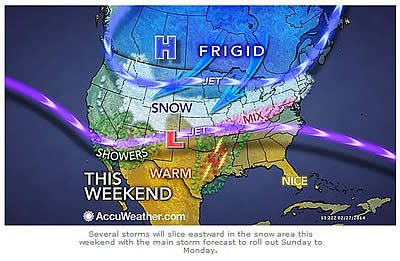 AccuWeather.com-(ENEWSPF)- AccuWeather.com reports March may not come in like a lion everywhere across the nation, but winter will roar during the first several days of the month and impact more than 100 million people.

Early indications are that a long-duration snow event will expand from the northern Rockies and central Plains to portions of the Midwest and Northeast in the days ahead.

The adverse winter conditions will develop Friday into Saturday over the Plains and is forecast to shift slowly eastward Sunday and Monday. Snowfall from the west to east storm will exceed a 1,500-mile stretch on its journey.

People traveling by road or airways should expect major delays as this area of snow expands eastward and crawls along. While some gaps are likely in between the storms, snow or a wintry mix could fall for 36 hours over a several-day stretch some areas in the central Plains and the middle part of the Mississippi Valley.

It is during the last part of the storm train, when the heaviest snow is likely to fall. This is projected to be Sunday to Monday over the northern part of the Ohio Valley to part of the central Appalachians and Monday into Monday night in the coastal Northeast.

For a time, the snow will impact areas between the I-70 and I-90 corridors over the Rockies and Plains and the I-64 to I-80 corridors in the Midwest and East.

Initially, the storm will evolve into a blizzard over the northern Rockies and northern High Plains with dangerously low AccuWeather RealFeel® temperatures.

Farther east, the storm may be less intense in terms of wind and low RealFeel extremes, but precipitation can be quite heavy and very disruptive. The storm is likely to impact not only travel, but also school and business activities. The storm may completely tap remaining ice-melting supplies in some communities.

According to AccuWeather Chief Meteorologist Elliot Abrams, "The challenge with this storm is figuring out where the north-south boundary between rain and snow will set up and migrate to as the storm progresses slowly eastward."

At this early stage, the storm has the potential to bring half of a foot to a foot of heavy wet snow along a 1,000-mile swath in the Midwest and East, with locally higher amounts. Snowfall rates at the height of the storm may reach 2 inches per hour. Ice is a concern for some areas as well.

"In a narrow swath, all or part of the storm will deliver snow that may be difficult to shovel and plow, due to its accumulation and weight," Abrams said. "While many areas will be impacted by the storm in the Midwest and East, we are not sure which areas will get hit the hardest with snow and ice just yet."

A tremendous temperature contrast will set up from north to south with the storm. A distance of 100 miles could bring temperatures ranging from the 60s and 70s to the 20s and 30s and the difference between rain, ice and snow.

"Because of the great amount of moisture available to this storm, a narrow zone of heavy ice can occur with downed trees and power outages," Abrams said.

In the warm air on the southern flank of the storm, drenching rain and thunderstorms will occur. Long-duration rainfall will occur near the rain/snow line, while the potential for strong to locally severe thunderstorms sweeping through is greatest over the lower Mississippi Valley.

Details will continue to unfold over the next few days on the storm as to which areas are mostly likely to receive all snow or a change from snow to rain and vice versa.