Washington, DC–(ENEWSPF)–April 17, 2012.  Discovery, the longest-serving orbiter in the space shuttle fleet, departed Kennedy Space Center in Florida around dawn today, and is expected to arrive at Washington Dulles International Airport about 11 a.m. EDT. After a two-day layover at the airport, where it will be de-mated from the 747 carrier aircraft it was transported on, the historic spacecraft will be towed to its nearby new home, the museum’s Steven F. Udvar-Hazy Center in Chantilly, Va. On Thursday, April 19, NASA and Smithsonian officials will sign documents officially transferring Discovery to the museum at an outdoor, public ceremony at the center. 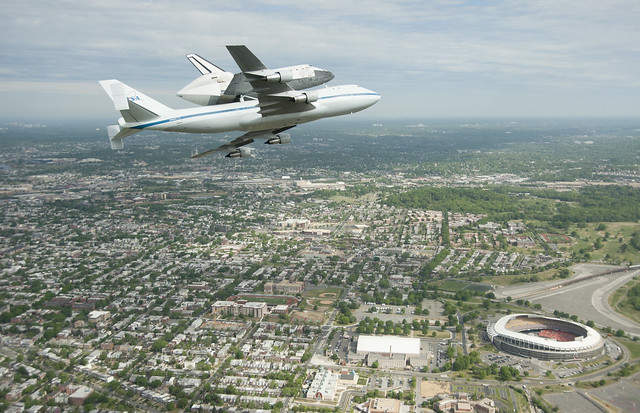 Discovery was the first of three orbiters retired from NASA’s shuttle fleet. Its final mission, STS-133, launched Feb. 24, 2011, and landed March 9. It completed 39 missions, spent 365 days in space, orbited the Earth 5,830 times and traveled 148,221,675 miles. A number of its missions were associated with technological and scientific achievements, including placement of the Hubble Space Telescope into orbit in 1990. Discovery is known for several historic achievements. The first African American commander, Frederick Gregory, flew the craft in 1989. In 1995, the orbiter was flown by the first female pilot of a spacecraft, Eileen Collins, who later commanded a 2005 Discovery mission. In 1998 Sen. John Glenn, at age 77, flew on the spacecraft in a return to space, having made history in 1962 as the first American to orbit the Earth in Friendship 7. Following the Challenger and Columbia tragedies, Discovery was chosen to re-initiate spaceflight.

To mark Discovery’s arrival, the museum and NASA are promoting “Spot the Shuttle,” a community-awareness campaign encouraging people to gather at publicly accessible locations near landmarks the orbiter is expected to pass.

“Discovery will fly one last time today, and then be placed at the National Air and Space Museum’s Udvar-Hazy Center, where it will inspire generations of visitors to come,” said Wayne Clough, Secretary of the Smithsonian. “As part of the Smithsonian collection, Discovery will bring a richer perspective to the historical and scientific significance of the space-shuttle program, one of our country’s greatest achievements.”

“NASA and the Smithsonian signed an agreement in 1967 that has enabled the National Air and Space Museum to preserve and display the greatest icons of our nation’s space history,” said Gen. J.R. “Jack” Dailey, director of the museum. “At the Udvar-Hazy Center, Discovery will be seen by millions of people in the coming years, especially children, who will become the next generation of scientists, engineers, researchers and explorers.

The decision to place Discovery at the National Air and Space Museum was announced by the space agency’s Administrator, Charles Bolden, April 12, 2011—the 30th anniversary of the shuttle program.

Thursday’s public ceremony will kick off “Welcome Discovery”—a four-day festival of space-related activities, performances, appearances by space pioneers, films and displays at the Udvar-Hazy Center. School students are especially invited to participate in the second day of the festival, “Student Discovery Day,” Friday, April 20. On Saturday and Sunday—the Discovery Family Weekend— activities will be geared to all age groups.

The Steven F. Udvar-Hazy Center contains two exhibition spaces, the James S. McDonnell Space Hangar and the Boeing Aviation Hangar. On the evening of April 19, Discovery will be placed on display in the space hangar, occupying a central position, surrounded by scores of other artifacts.

The National Air and Space Museum in Washington, D.C., is located at Sixth Street and Independence Avenue S.W. The Steven F. Udvar-Hazy Center is located in Chantilly, Va., near Washington Dulles International Airport. Both facilities are open daily from 10 a.m. until 5:30 p.m. (closed Dec. 25). Admission is free, but there is a $15 fee for parking at the Udvar-Hazy Center.