Washington, DC–(ENEWSPF)–June 3, 2013.  A new study, published in Proceedings of the Royal Society, found that genetically engineered (GE) AquaBounty AquaAdvantage salmon can successfully cross-breed with brown trout, a closely related species. GE salmon, created by the biotech company AquaBounty, are designed to reach maturity faster than their wild counterparts and would be the first GE animal approved for human consumption in the United States. As a result of this study, the authors “…suggest that interspecific hybridization be explicitly considered when assessing the environmental consequences should transgenic animals escape to nature.” 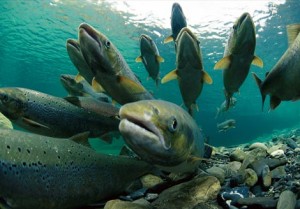 The study not only found that GE salmon can cross-breed with brown trout, but also that their GE hybrid offspring could outgrow wild salmon, non-GE hybrid offspring, and even GE salmon. The GE hybrids also out-competed wild salmon and GE salmon in simulated stream environments, further stunting the growth of other fish. According to Andrew Kimbrell, executive director of Center for Food Safety, “This study highlights yet another ecological risk of these hazardous genetically engineered fish. The FDA’s [U.S. Food and Drug Administration] attempt to approve these gene altered fish without even analyzing these irreversible impacts on our native salmon and trout populations is unlawful and a gross abuse of their regulatory duties.”

In order to create the transgenic fish, Aquabounty genetically engineered an Atlantic salmon by inserting a Chinook salmon growth-hormone gene, as well as a gene sequence from an ocean pout. The company claims this engineering causes the GE salmon to undergo an increase in growth rate that allows the fish to reach market size in half the normal time. Consumer groups Center for Food Safety, Food & Water Watch and Consumers Union submitted a formal petition to the agency in February 2012 to classify and evaluate the GE salmon as a food additive.

In December of last year, FDA announced its release of a Draft Environmental Assessment (EA) and Preliminary Finding of No Significant Impact on GE salmon. This action was widely viewed as confirmation that FDA was prepared to quickly approve GE salmon. FDA then accepted public comments on the draft EA and Finding of No Significant Impact, and received nearly 2 million public comments opposing its plan to approve GE salmon. One of the obvious problems with the draft environmental assessment was that it limited the assessment to only reviewing the environmental impacts of the Canadian and Panamanian facilities proposed in the application. Documents discovered through a Freedom of Information Act (FOIA) request indicated that U.S. Fish and Wildlife Service has already received a request to import AquaAdvantage Salmon eggs into the U.S. for commercial production.

AquaBounty claims that the company’s process for raising GE fish is safer than traditional aquaculture, yet documents released by the Canadian government show that a new strain of infectious salmon anemia, a deadly fish flu that has been devastating fish stocks around the world, contaminated their Canadian production site. This information was not included in the FDA’s review.

Several food retailers have already promised they will not stock GE salmon if it is approved for sale by the FDA. Whole Foods Market Inc, Trader Joe’s, Aldi, and other food retailers representing more than 2,000 U.S. stores have committed not to sell GE salmon. “Our current definition of sustainable seafood specifies the exclusion of genetically modified [GE] organisms,” said a spokeswoman for Aldi.

For more information on the environmental hazards associated with GE technology, and national and local efforts to label GE food, visit Beyond Pesticides’ Genetic Engineering webpage. The best way to avoid genetically engineered foods in the marketplace is to purchase foods that have the U.S. Department of Agriculture (USDA) Certified Organic Seal. Under organic certification standards, genetically modified organisms and their byproducts are prohibited. For many other reasons, organic products are the right choice for consumers.