Washington, DC–(ENEWSPF)–October 20, 2015.  Exposure to neonicotinoid (neonic) pesticides results in profound negative impacts to the health of honey bee queens, according to an international team of researchers led by Geoff Williams, MD, PhD, at the University of Bern in Switzerland. While most studies to date have investigated how neonics effect the health of individual workers or overall colony fitness, Dr. William’s study, Neonicotinoid pesticides severely affect honey bee queens, is one of the first to focus on the health of honey bee queens. Neither the European Union nor U.S. Environmental Protection Agency (EPA) study the impacts of pesticides on queen health before allowing a pesticide to market. The results of this research are particularly concerning, given widespread anecdotal evidence from beekeepers across the globe that ‘poor quality queens’ are playing a role in bee declines. 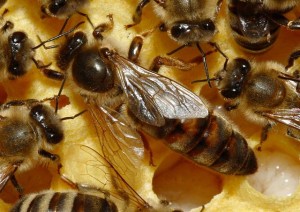 To test the impacts of these chemicals on queen honey bees, scientists exposed a sample of 29 queens to field-realistic levels of the neonics  clothianidian and thiamethoxam (1 parts per billion and 4 ppb respectively), and compared them to a population of 28 control queens, which were not treated with neonics. Both groups experienced similar environmental circumstances in terms of food availability, rearing process, and hive conditions. Researchers set up mating nucleus colonies to observe queen mating flights (in which queens leave the hive in search of male drone bees). A queen may mate with from anywhere from one to 40 drones, but averages roughly 12. The queen can store up to 6 million spermatozoa from her mating flight, which she uses to lay fertilized (female) worker bees throughout the rest of her life (queens generally live 2-7 years).

Queen bees are the powerhouse of honey bee hives, laying up to 1,500 eggs per day. Queens can determine the sex of eggs they lay (a term called haplodiploidy), as females worker bees are fertilized and male drone bees are not. Healthy queens are critical for healthy hives.

Neonicotinoids have amassed a significant body of research pointing to adverse effects not only in honey bees, but in bumble bees, monarchs, other pollinators, and proper ecosystem functioning in general. Co-author of the research, Peter Neumann, PhD, stated in a press release, “This study, along with other recently published ones, supports calls for more thorough environmental risk assessments of agricultural chemicals to protect biodiversity and ecosystem functioning.”

In December 2013, the European Union instituted a 2-year moratorium on the use of neonics on bee-attractive crops. The decision will not expire at the end of this year, but remain in place while regulators determine its renewal. Earlier this year, the Canadian province of Ontario moved to reduce by 80% the use of neonic-coated seeds, a major route of toxic chemical exposure for honey bees.

In the U.S., action at the federal level has done little to take the sting out of pollinator declines. Despite the announcement of a coordinated National Pollinator Health Strategy this May, federal agencies continue to exhibit widely different approaches on how to address pollinator declines. While the U.S. Fish and Wildlife Service banned the use of neonics on National Wildlife Refuge Land, and the White House Council on Environmental Quality released new guidelines prohibiting the planting of neonic-treated plants at federal facilities, EPA and U.S. Department of Agriculture (USDA) have taken little substantive action. Although EPA recently proposed modest label changes to protect bees from acute pesticide exposure, USDA submitted comments criticizing the agency’s proposed rule, saying that it had “not established the need for such a prohibition.”

The Saving America’s Pollinator’s Act of 2015 remains an avenue for Congress to address the pollinator crisis. Contact your U.S. Representative and ask them to support this important legislation today. You can also get active in your community to protect bees by advocating for policies that restrict their use. Montgomery County, Maryland recently restricted the use of a wide range of pesticides, including neonics, on public and private property. Sign here if you’d like to see your community do the same!