Washington, DC–(ENEWSPF)–September 25, 2015.  Neonicotinoid-treated seeds do not reduce crop damage from pests, adding to a growing body of evidence questioning the benefits of using these bee-toxic insecticides, according to a study published in the journal BioOne. Widely-used neonicotinoids (neonics), which as systemic chemicals move through a plant’s vascular system and express poison through pollen, nectar, and guttation droplets, have been identified in multiple peer-reviewed studies and by beekeepers as the major contributing factor in bee decline. 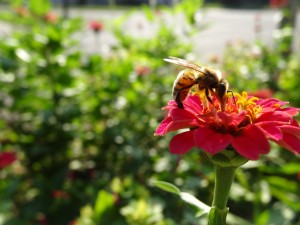 The study, titled Impact of Western Bean Cutworm (Lepidoptera: Noctuidae) Infestation and Insecticide Treatments on Damage and Marketable Yield of Michigan Dry Beans, examines the relationship between western bean cutworm infestation and damage in dry beans, and the use of seeds treated with the neonicotinoid thiamethoxam, as well as soil treated with aldicarb, another systemic insecticide. Researchers have concluded that neither thiamethoxam nor aldicarb reduced cutworm damage. In fact, plots treated with these insecticides had a higher percentage of defects due to feeding by pests when compared to untreated plots, which researchers believed is attributable to factors such as fewer natural enemies.

There have been additional reports and studies published over the past few years questioning the benefits of neonic use. In 2014, EPA released a report concluding that soybean seeds treated with neonicotinoid insecticides provide little or no overall benefits in controlling insects or improving yield or quality in soybean production. Also published last year was a report by Center for Food Safety refuting claims that neonicotinoids bring greater benefits than costs to farmers. In the report, researchers analyzed independent, peer-reviewed, scientific literature and found that the benefits of prophylactic neonicotinoid use via seed treatments were nearly non-existent, and that any minor benefits that did occur were negated due to honey bee colony impacts, reduced crop pollination by honey bees, reduced production of honey and other bee products, loss of ecosystem services, and market damage from contamination events. Furthermore, preliminary reports out of the UK find that the country is poised to harvest higher than expected yields of canola in its first neonicotinoid-free growing season since the European moratorium on neonicotinoids went into place in 2013. According to the UK’s Agriculture and Horticulture Development Board’s (AHDB) Harvest Report, with 15% of canola harvested this year, yields are between 3.5 and 3.7 tons per hectare, higher than the normal farm average of 3.4.

In light of the shortcomings of federal action to protect these beneficial organisms, pollinators need pesticide-free habitats that provide safe havens. Take action by calling on EPA to suspend neonicotinoids now. You can also declare your garden, yard, park or other space as pesticide-free and pollinator friendly. It does not matter how large or small your pledge is, as long as you contribute to the creation of safe pollinator habitat. Sign the pledge today! Need ideas on creating the perfect pollinator habitat? The Bee Protective Habitat Guide can tell you which native plants are right for your region. For more information on what you can do, visit our BEE Protective page.