Washington, DC–(ENEWSPF)–September 20, 2013.  A study of women in Northern California farm towns finds that those living within three miles of strawberries fields treated with methyl bromide gave birth to smaller, lighter babies. Methyl bromides, a fumigant pesticide injected into soils to eliminate soil-borne pests, can volatize into the air exposing nearby neighborhoods. The U.S. and other developed countries have banned the use of methyl bromide under an international treaty that recognized the role of chemicals like methyl bromide to deplete the ozone layer. However, some farmers continue to use the fumigant on strawberries and other crops due to the “critical use exemption” (CUE) stipulation of the laws, which allows the chemical to continue to be used when there are no feasible alternatives.

The study, published in Environmental Health Perspectives, examined the health of babies born to 442 pregnant women living in Salinas Valley, CA in 1999 and 2000, when methyl bromide was widely used. 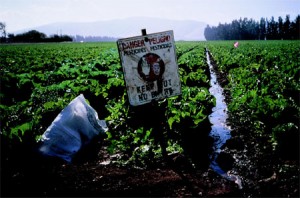 Utilizing data from California’s Pesticide Use Reporting System, the study was able to identify residences that were within 5 kilometers of methyl bromide application.

Researchers find that women exposed to the chemical during their second trimester have babies that are four ounces lighter on average than women living in areas with no methyl bromide use. For comparison, this is half the weight decrease caused by smoking, say researchers.

However, only four percent of babies were born at what is considered “low birth weight,” less than 5.5 pounds. In other words, the majority of babies were still considered with normal ranges. The significance of smaller babies when it comes to their health is still unclear, but low birth weight babies are known to be at higher risk for developmental delays and learning disabilities.

“For a baby on the low end of the normal birth weight, 4 ounces could make a big difference,” said Kim Harley, PhD., author, and associate director of the Center for Environmental Research and Children’s Health at University of California, Berkeley.

Additionally, Dr. Harley noted that the majority of women studied were Latinas from Mexico who, in general, tended to have healthy birth weight babies, but “across the board we saw a shift towards slightly lighter babies.”

While about 41 percent of the women did some field work while pregnant, few worked in fields that had been treated with methyl bromide, raising concerns about the role of residential exposure to methyl bromide and expanding the dialogue beyond farmworkers.

The study has one major limitation: the amount of methyl bromide the women were exposed to is largely unknown, as their exposures were based solely on residential locations. “A woman could work 12-hour shifts 40 miles from home or spend little time outdoors near her own home. It’s impossible to say whether these estimates represent an accurate picture of exposure,” said Myles Cockburn, PhD., an epidemiologist at the University of Southern California, to Environmental Health News.

However, the study is part of a 14-year, ongoing project by scientists to determine the health impacts of children born in the Salinas Valley, and exposed to methyl bromide. Additionally, this research builds on previous studies demonstrating that methyl bromide increases the risk of prostate cancer and causes damage to the neurological, reproductive, and endocrine systems.

The only way to know that you are not being exposed to hazardous soil fumigants is to buy organically produced food. Organic agriculture does not allow the use toxic chemicals that have been shown to drift and cause a myriad of chronic health effects, such as cancer, endocrine disruption and a series of degenerative diseases like Parkinson’s disease. To learn more about organic agriculture please visit Beyond Pesticides organic agriculture page. For more information on organic versus conventional agricultural practices, see Beyond Pesticides’ guide, Organic Food: Eating with a Conscience, urging consumers to consider impacts on the environment, farmworker and farm families’ health –in addition to personal health impacts posed by pesticide residues– when making food choices.