Washington, DC–(ENEWSPF)–November 8, 2013.  In a new study on ecosystems in the Midwest, scientists suggest that once-fertile landscapes dominated by tall grass prairies and supported by microbial biodiversity have been destroyed due to decades of agricultural production. The study, Reconstructing the Microbial Diversity and Function of Pre-Agricultural Tall Grass Prairie Soils in the United States, published in the journal Science, demonstrates the crucial role soil microbial diversity plays in ecosystem stability and health. 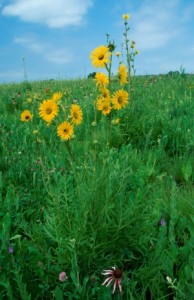 Although soil microbes are inherently important for the breakdown of organic matter, the cycling of nutrients, as well as plant productivity, previous research has narrowly focused on the role of nitrogen fixing root fungi, rather than broader aspects of soil microbial diversity. Thus, this new study represents one of the first to delve into the importance of soil microorganisms in ecosystem restoration projects.

By comparing soil samples from 31 uncultivated prairie sites, such as cemeteries and national parks, lead author Noah Fierer, PhD., at University of Colorado at Boulder and colleagues were able to identify microbes that likely inhabited the prairies prior to agricultural production. The study found that small changes to the abundance of Verrucomicrobia —until now a poorly researched soil bacterium— were the primary driving force behind changes to the ecosystem processes. The bacterium is thought to play a crucial role in carbon cycling. Researchers found that the bacteria seemed to thrive in soils with poor nutrients, which would certainly explain why they tend to be less common on agricultural land that has been over-fertilized with chemical inputs.

“They were the most fertile soils that existed in North America,” says Dr. Fierer. “Problem is, those soils don’t exist anymore. They’ve been ploughed under and subjected to centuries of growing corn.”

The research builds upon a mounting body of evidence demonstrating that conventional farming methods not only destroy habitat, they also destroy soil structure and affect plant health and crop production. One recent study, published in Proceedings from the National Academy of Sciences, found that pesticide use on farms severely reduced the efficiency of nitrogen-fixing plants, impacting soil fertility and ultimately reducing crop yields by over a third over the past 25 years. Other recent research on genetically engineered (GE) crops, dominating the landscape in the Midwest, found that corn genetically engineered to express the insecticidal bacterial Bacillus thuringiensis (Bt) reduced the functioning of beneficial soil fungi.

The study opens up a range of further research possibilities for soil science, demonstrates the importance of soil microbial communities and provides guidance on sustainable soil management.

Beyond Pesticides has long supported “feed-the-soil” approaches to lawn and landscape management. Understanding the role of healthy soils in creating healthy landscapes, we promote a systems approach that centers on management of soil health and proper fertilization that eliminates synthetic fertilizers and focuses on building the soil food web and nurturing soil microorganisms. Experience demonstrates that this approach will build a soil environment rich in microbiology that will produce a strong, healthy lawn that is able to withstand many of the stresses that affect lawns and landscape. For more information lawn and landscape management, visit our issues page.