Washington, DC–(ENEWSPF)–October 14, 2014.  Though pollinators only account for about 10% of the production of food crops worldwide, pollinator decline could play a disproportionate role in affecting human health in regions that are already facing food scarcity, according to a new study. Global malnutrition overlaps with pollinator-dependent micronutrient production, published last month in the Proceedings of the Royal Society B. The study examines regional differences in pollinator dependence of the micronutrient content in crops, revealing a significant overlap between this dependency and the severity of nutrient deficiency. Previous research has underscored the importance of pollinators to agriculture in the U.S., finding that their services are essential to crop yields, A May 2013 report by the U.S. Department of Agriculture (USDA) found that one in three bites of food depends on pollination, mainly by honey bees, and that pollination is valued at $20 to $30 billion annually. 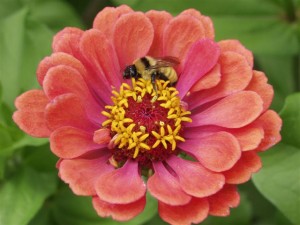 For the study, scientists collected data on nutrient contents, pollination dependence and regional agricultural yields for more than 100 of the most common crops grown for global consumption. Combining that data with USDA nutritional information, they were able to determine that three essential nutrients were dependent on pollinators, vitamin A, iron and folate. According to the report, the regions that are most in need of those nutrients are India, South Asia and sub-Saharan Africa. In fact, as much as 50% of the production of plant-derived sources of vitamin A requires pollination throughout much of Southeast Asia. Micronutrient deficiencies are three times as likely to occur in areas of highest pollination dependence for vitamin A and iron, suggesting that disruptions in pollination could have serious implications for the accessibility of micronutrients for public health.

“Taking these three separate lines of research —where crops are grown, how nutritious are they, and how dependent are they on pollination— you realize there are really different patterns in which nutrition production is most dependent on pollination,” said Rebecca Chaplin-Kramer, PhD, lead author of the study.

The cause of pollinator decline is No Longer a Big Mystery. Neonicotinoids are systemic, meaning that as the plant grows the pesticide becomes incorporated into the plant. When honey bees and other pollinators forage and collect pollen or nectar, or drink from what are termed “guttation” (water) droplets emitted from neonicotinoid-incorporated crops, they are exposed to sublethal doses of the chemical. At this level, the pesticides don’t kill bees outright. Instead, they impair bees’ ability to learn, to find their way back to the hive, to collect food, to produce new queens, and to mount an effective immune response.

In the U.S., little to no definitive action has been taken to protect pollinators from pesticide decline. The U.S. Environmental Protection Agency (EPA), which oversees pesticide regulation, relies on industry-funded data to inform its decision making process regarding pesticide impacts on human and ecological health. While industry-supported studies submitted to EPA for regulatory purposes must be conducted in accordance with agency protocol, EPA’s reliance on industry-generated findings has  been historically questioned. EPA has been criticized by Congress and the Government Accountability Office (GAO) for allowing regulated industry influence. In 2008, the Union of Concerned Scientists released its survey finding that 889 of nearly 1,600 EPA staff scientists say that they have experienced political interference in their work over the previous five years.

Meanwhile, the scientific database linking severe, long-term adverse effects of neonicotinoids on bees and other pollinators keeps growing. Neonicotinoid pesticides have been implicated in bee declines across the globe, while their chemical manufacturers continue to deflect attention from their products to other factors, such as bad weather, poor nutrition, and mites. Recent studies have found that near infinitesimal exposures to neonicotinoids causes a reduction in the amount of pollen that bumblebees are able to collect for their colony. Researchers found that the effects of neonicotinoid intoxication persist for a least a month after exposure, underscoring the long-term damage these chemicals can cause to bee colonies. Another study from the Harvard School of Public Health study, shows two widely used neonicotinoids significantly harm honey bee colonies over the winter, especially during colder winters. The U.S. Geological Survey (USGS) recently published data that shows widespread contamination and persistence of Midwest waterways with neonicotinoids.

Recently, EPA published two tools in an effort to protect pollinators, the availability of its new Pollinator Risk Assessment Guidance, which is intended to bring clarity to the required data needed to be submitted for review by the agency, and Residual Time to 25% Bee Mortality (RT25 data), which informs applicators of the time pesticides remain acutely toxic on vegetation after application. However, despite these, the agency still falls short of answering the call of many concerned beekeepers and environmentalists who have called for restricting neonicotinoid pesticides.

A Presidential Memorandum issued in June directs federal agencies to “reverse pollinator losses and help restore populations to healthy levels,” and establish a Pollinator Health Task Force, as well as develop a National Pollinator Health Strategy, including a Pollinator Research Action Plan. Fortunately, the memorandum recognizes the severe losses in the populations of the nation’s pollinators, including honey bees, wild bees, monarch butterflies, and others are detrimental to our economy. Agencies have 180 days to respond to this memorandum. Meanwhile, H.R. 2692, the Saving America’s Pollinators Act (SAPA), introduced last year by Representatives John Conyers (D-MI) and Earl Blumenauer (D- OR), a bill seeking to suspend the use of neonicotinoid pesticides until a full review of scientific evidence demonstrates no harmful impacts to pollinators, is gaining bipartisan support in Congress.

With one in three bites of food reliant on pollinators, it is imperative that solutions be found quickly to protect bees and other pollinators. For more information on actions you can take to protect pollinators, go to Beyond Pesticides’ BEE Protective campaign page.