Washington, DC–(ENEWSPF)–September 18, 2015.  Glyphosate’s harmful effects continue to accumulate, this time with evidence pointing to toxic and sublethal effects on bees. According to a new study conducted by German and Argentinian researchers, honey bees exposed to low levels of glyphosate have a hard time returning home. Glyphosate, the controversial and toxic active ingredient in Monsanto’s Roundup, is an herbicide widely used on genetically-engineered (GE) crops as well as on parks and golf courses, for control of weeds and grasses. Along with neonicotinoids, which have been linked to worldwide bee decline by a growing body of science, glyphosate is just another chemical in the toxic mixture that bees and other non-target organisms are constantly exposed to in the environment. 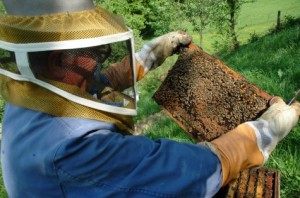 In the study, titled “Effects of sublethal doses of glyphosate on honeybee navigation” and published in the Journal of Experimental Biology, researchers evaluate the effects of recommended concentrations of glyphosate used in agricultural settings on honey bee navigation and found that a single exposure to a concentration of glyphosate within this range delays the return of the foraging honey bee to the hive. Flight trajectories were also affected after successive exposure to the herbicide, suggesting that the spatial learning process is impaired by glyphosate ingestion during feeding.

Other environmental problems from exposure to glyphosate that have been documented include adverse effects on earthworms and other soil biota, as well as shape changes in amphibians. The widespread use of the chemical on genetically engineered glyphosate-tolerant crops has led it to be implicated in the decline of monarch butterflies, whose sole site to lay their eggs, milkweed plants, is being destroyed by glyphosate applications.

Along with environmental effects, glyphosate exposure has also been linked to health problems in humans. A research study published in the journal Environmental Health links chronic, links ultra-low dose exposure to glyphosate through drinking water to adverse liver and kidney function. The study, Transcriptome profile analysis reflects rat liver and kidney damage following chronic ultra-low dose Roundup exposure, is the latest in a string of data showing unacceptable risks resulting from the use of glyphosate and products formulated with the chemical, like Roundup. Beyond direct impacts to the kidney and liver, glyphosate has recently been implicated as a having sufficient evidence of carcinogenicity based upon an analysis of laboratory animal studies conducted by the World Health Organization’s International Agency for Research on Cancer. Recently, California Environmental Protection Agency’s Office of Environmental Health Hazard Assessment (OEHHA) announced that it intended to list glyphosate as a cancer-causing chemical under California’s Safe Drinking Water and Toxic Enforcement Act of 1986 (Proposition 65).

Most commonly formulated as Monsanto’s Roundup herbicide, glyphosate end-use products account for approximately 180-185 million pounds applied per year, making it the number one commonly used chemical in the U.S. Glyphosate use is currently growing due in large part to the increased cultivation of GE crops that are tolerant to the herbicide. Corn and soybeans were originally genetically engineered to tolerate glyphosate in the mid-1990s. Today, these crops account for 90% of corn and soybeans in the U.S., leading to a dramatic increase in herbicide use. In fact, the researchers point out that glyphosate use has increased by a factor of more than 250 — from 0.4 million kg in 1974 to 113 million kg in 2014. This not surprisingly allows herbicide-resistant superweeds to emerge, which leads the industry to turn to other dangerous chemicals like 2,4-D and glufosinate.

In the face of these widespread health impacts, and in the absence of real action to restrict this chemical at the federal level, it is up to concerned citizens to advocate for changes in public land management practices within their community. Whether the pesticide use relates to a local government, homeowners’ association, or child’s playing field, concerned residents can effect positive change to get glyphosate and other unnecessary bee-toxic chemicals like neonicotinoids out of the community. Get your community campaign going with Beyond Pesticides’ Start Your Own Local Movement factsheet. Although glyphosate is an important chemical to remove from use in your community, a range of chemicals are linked to public health impacts, and a comprehensive approach that encourages organic land management is the best long-term solution.