Washington, DC–(ENEWSPF)–November 15, 2013.  Recommended measures to reduce Lake Erie’s phosphorous, a fertilizer ingredient that feeds algae and steals aquatic oxygen, was released Wednesday by the Lake Erie Task Force II. The collaboration of officials, scientists, and interest groups identified agriculture as the primary contributor to phosphorous loading in Lake Erie, recommending that the nutrient runoff into northwestern Ohio tributaries and to the lake be cut by 40 percent.

Fertilizer runoff not only causes unsightly and odiferous algal blooms, it can also severely harm aquatic wildlife. Once algae dies off, aerobic bacteria consume the dead algae resulting in 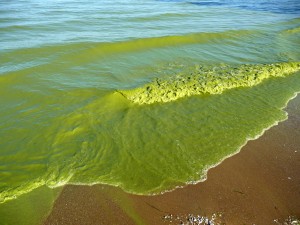 dangerously low oxygen “dead zones.” Lake Erie is particularly prone to algal blooms in part because it is the southern-most, shallowest and warmest of the Great Lakes, but also because surrounded by prime agricultural land.

Unfortunately, the task force is recommending strictly voluntary measures and many environmental advocacy groups have voiced their concern that they will not be enough to produce visible changes in agricultural practices. On the other hand, David Daniels, the director of the Ohio Department of Agriculture, supports the approach, and said, “Ohio farmers understand the problem and they certainly want to be part of the solution.”

The Ohio Department of Agriculture has already worked with 350 farmers in the Maumee River watershed —the largest contributor to phosphorous loading in the region, covering parts of Ohio, Michigan, and Indiana— to implement conservation practices, says James Zehringer, director of the Ohio Department of Natural Resources. “One farmer told me that he’ll continue these practices on his own without state funds because these practices saved him money,” says Mr. Zehringer.

Legislation to regulate nutrient application was introduced in the state legislature in June and referred to the Ohio Senate Agriculture Committee, where it is awaiting action. One of the bill’s sponsors, Ohio Senator Bob Peterson, says that, “It’s a starting point [for Ohio state agencies] to define what a nutrient bill would look like.”

Despite the slow legislative progress, there are several innovative tactics that have been recommended to reduce phosphorous runoff and have already been implemented on the small scale. Some strategies include water control devices that restrict tile drainage, planting of cover crops to hold in soil nutrients after crops have been harvested, wetland restoration to capture excess runoff, and providing unplanted grassy areas which act as a filter and barrier between fields and drainage structures.

The report provides an update on the 2010 Task Force Report, which concluded “that there are multiple contributors of phosphorous in Lake Erie, but agriculture is the leading source.”

Agricultural practices are not the only source of excessive phosphorous pollution. Residential use of lawn care fertilizers represents a significant portion of the phosphorous load that runs into local water bodies in the U.S. For information on steps you can take to reduce the phosphorous contamination coming from your community, see Beyond Pesticides article, Maintaining a Delicate Balance.

Organic farming and land management uses natural, less soluble sources of nitrogen, phosphorous and magnesium, including cover crops, compost, manure and mineralized rock,  in order to promote increases in soil organic matter and a healthy soil structure. Healthy soil structure allows water to infiltrate the ground slowly, rather than escaping across the surface and carrying soil particles, nutrients, and other inputs with it. Healthy soil structure also allows plants to establish vibrant root systems that resist erosion. For more information on the importance of an organic systems approach as a solution to pesticide use, see Beyond Pesticides’ article Increasing Biodiversity As If Life Depends on It.