AccuWeather-(ENEWSPF)- AccuWeather reports Tropical Depression Nine developed just south of Florida on Sunday and will turn toward the northeastern Gulf Coast of the United States later this week.

The center of this system is about 350 miles west of Key West, Florida. The latest indications are that the storm was beginning to turn toward the northwest.

Prospect of strengthening in Gulf of Mexico

While Tropical Depression Nine could become a tropical storm at any time into Thursday morning.

“Tropical Depression Nine will be moving into an area more favorable for strengthening,” according to AccuWeather Hurricane Expert Dan Kottlowski.

Latest indications point toward the system making landfall along the northeastern Gulf Coast, most likely in the Big Bend area of the Florida coast on Thursday. 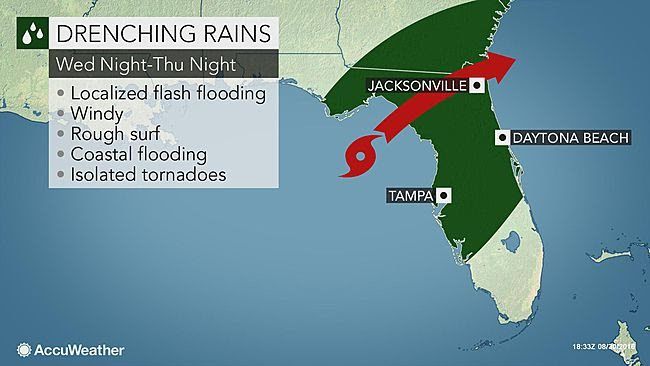 A storm system near the Texas coast and another system are forecast to plunge into the eastern United States should grab Tropical Depression Nine and cause it to turn quickly to the northeast at midweek.

In this most likely scenario, the system would then track across the northern part of the Florida Peninsula on Thursday, along the coast of Georgia on Friday and off the Carolina coast during Labor Day weekend.

Only if the depression remains weak and misses the connection would the system wander farther west and perhaps make landfall along the central Gulf coast.

There is the potential for 4-8 inches of rain near, east and northeast of where the center makes landfall.

All residents and visitors from the central and northeastern Gulf Coast to the coastal Carolinas should continue to monitor the progress Tropical Depression Nine and review what preparations are needed if a strong tropical storm threatens.

Should the system strengthen and track in the upper part of the west coast of Florida, low-lying areas near and south of the center of the storm could face coastal flooding during the period fromWednesday night to Thursday.

Residents of Louisiana should also keep an eye on this system in the event it moves on a farther west path than anticipated.

As Tropical Depression Nine swirls over the south-central Gulf of Mexico, the Florida Keys, the southern part of the Florida Peninsula, the western Bahamas and central and western Cuba there will be a risk of flooding downpours and locally gusty thunderstorms into Tuesday night. Mudslides will be a concern in Cuba.

The heaviest storms could bring damaging wind gusts, power outages and rough seas, as well as the potential for a couple of tornadoes and waterspouts.