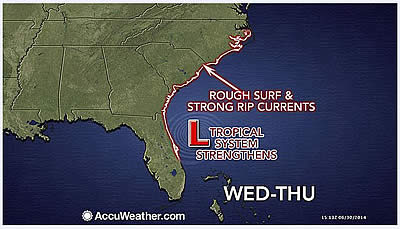 AccuWeather.com-(ENEWSPF)- AccuWeather reports a disturbance near Florida is forecast to strengthen and drift northward along the East coast this week, spreading rough surf, gusty winds and drenching downpours.

The AccuWeather.com Hurricane Center is predicting that conditions will become more favorable for tropical development along southern Atlantic coast of the United States this week and could yield the first tropical storm of the 2014 season.

A disturbance was battling dry air and wind shear (disruptive winds) on Monday east of Florida and north of the Bahamas.

According to AccuWeather Hurricane Expert Dan Kottlowski, "As the dry air and wind shear diminish at midweek, there will be room for the system to organize, strengthen and drift northward."

How nasty the weather gets on the Atlantic coast will depend on the track and strength of the system as it passes by. There is a possibility of a period of heavy rain, gusty thunderstorms and building surf.

People heading to the beaches on the Atlantic coast from Florida to southern New England can expect a couple of days on average of rough weather and surf.

The low being monitored for possible tropical development was captured in this satellite image Monday midday.

"This is a situation where the surf and strong rip current risk builds over a few days as the system strengthens and begins to track northward," Kottlowski said.

For people heading to Daytona Beach, Florida, expect building surf Tuesday intoWednesday. Farther north along North Carolina’s Outer Banks, the worst conditions will beThursday into Friday. The worst conditions are likely to be Friday over Long Island and perhaps as far north as Cape Cod, Massachusetts.

"The system, which is forecast to become a tropical storm, will hug the coast and could even make landfall in North Carolina before turning out to the Northeast late in the week," Kottlowski said.

The first name on the list of tropical storms and hurricanes for the 2014 Atlantic season is Arthur.

The possibilities with the peak intensity of the system range from a tropical depression to a minimal hurricane.

To make the matter more complex, a front drifting in from the Midwest may stall for a while along the Atlantic Seaboard. The front will produce severe weather and the risk of tornadoes in part of the Midwest into Tuesday.

According to AccuWeather Long-Range Expert Paul Pastelok, "As tropical moisture interacts with the front, very heavy downpours may erupt along the I-95 corridor late in the week."

Dry air is likely to be drawn in soon after the system passes by. Odds favor sunshine late this week over much of Florida, Georgia and South Carolina.

"If the tropical system takes a northeastward turn late in the week, as we suspect, rain and thunderstorms will begin to shift eastward and out to sea Friday afternoon and evening so that the weather improves for fireworks Friday night from Washington, D.C., to Philadelphia and New York City," Pastelok said.

There is a threat of rain Friday night for Boston and in part of southeastern New England.

There is a slight chance the system may stall along the Carolina coast late in the week, which would not only delay clearing but could keep the threat of showers and thunderstorms beyond the daylight hours on Friday.

Interests along the Atlantic coast will need to monitor the track and intensity of the budding tropical system this week. AccuWeather.com will continue to provide updates.

Meanwhile, in the Eastern Pacific, Douglas and Elida were spinning to the southeast of Mexico.