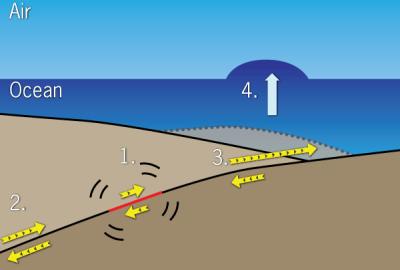 Stanford University-(ENEWSPF)- The magnitude 9 earthquake and resulting tsunami that struck Japan on March 11 were like a one-two punch – first violently shaking, then swamping the islands – causing tens of thousands of deaths and hundreds of billions of dollars in damage. Now Stanford researchers have discovered the catastrophe was caused by a sequence of unusual geologic events never before seen so clearly.

"It was not appreciated before this earthquake that this size of earthquake was possible on this plate boundary," said Stanford geophysicist Greg Beroza. "It was thought that typical earthquakes were much smaller."

The earthquake occurred in a subduction zone, where one great tectonic plate is being forced down under another tectonic plate and into the Earth’s interior along an active fault.

The fault on which the Tohoku-Oki earthquake took place slopes down from the ocean floor toward the west. It first ruptured mainly westward from its epicenter – 32 kilometers (about 20 miles) below the seafloor – toward Japan, shaking the island of Honshu violently for 40 seconds.

Surprisingly, the fault then ruptured eastward from the epicenter, up toward the ocean floor along the sloping fault plane for about 30 or 35 seconds.

As the rupture neared the seafloor, the movement of the fault grew rapidly, violently deforming the seafloor sediments sitting on top of the fault plane, punching the overlying water upward and triggering the tsunami.

"When the rupture approached the seafloor, it exploded into tremendously large slip," said Beroza. "It displaced the seafloor dramatically.

"This amplification of slip near the surface was predicted in computer simulations of earthquake rupture, but this is the first time we have clearly seen it occur in a real earthquake.

"The depth of the water column there is also greater than elsewhere," Beroza said. "That, together with the slip being greatest where the fault meets the ocean floor, led to the tsunami being outlandishly big."

Beroza is one of the authors of a paper detailing the research, published online last week in Science Express.

"Now that this slip amplification has been observed in the Tohoku-Oki earthquake, what we need to figure out is whether similar earthquakes – and large tsunamis – could happen in other subduction zones around the world," he said.

Beroza said the sort of "two-faced" rupture seen in the Tohoku-Oki earthquake has not been seen in other subduction zones, but that could be a function of the limited amount of data available for analyzing other earthquakes.

There is a denser network of seismometers in Japan than any other place in the world, he said. The sensors provided researchers with much more detailed data than is normally available after an earthquake, enabling them to discern the different phases of the March 11 temblor with much greater resolution than usual.

Prior to the Tohoku-Oki earthquake, Beroza and Shuo Ma, who is now an assistant professor at San Diego State University, had been working on computer simulations of what might happen during an earthquake in just such a setting. Their simulations had generated similar "overshoot" of sediments overlying the upper part of the fault plane.

Following the Japanese earthquake, aftershocks as large as magnitude 6.5 slipped in the opposite direction to the main shock. This is a symptom of what is called "extreme dynamic overshoot" of the upper fault plane, Beroza said, with the overextended sediments on top of the fault plane slipping during the aftershocks back in the direction they came from.

"We didn’t really expect this to happen because we believe there is friction acting on the fault" that would prevent any rebound, he said. "Our interpretation is that it slipped so much that it sort of overdid it. And in adjusting during the aftershock sequence, it went back a bit.

"We don’t see these bizarre aftershocks on parts of the fault where the slip is less," he said.

The damage from the March 11 earthquake was so extensive in part simply because the earthquake was so large. But the way it ruptured on the fault plane, in two stages, made the devastation greater than it might have been otherwise, Beroza said.

The deeper part of the fault plane, which sloped downward to the west, was bounded by dense, hard rock on each side. The rock transmitted the seismic waves very efficiently, maximizing the amount of shaking felt on the island of Honshu.

The shallower part of the fault surface, which slopes upward to the east and surfaces at the Japan Trench – where the overlying plate is warped downward by the motion of the descending plate – had massive slip. Unfortunately, this slip was ideally situated to efficiently generate the gigantic tsunami, with devastating consequences.

Other coauthors of the Science Express paper are Annemarie Baltay, a graduate student in geophysics at Stanford, and Satoshi Ide, an associate professor of Earth and planetary science at the University of Tokyo.