Washington, DC–(ENEWSPF)–August 15, 2012.  After decades of denying Vietnamese requests for assistance in a cleanup, the United States launched its first major effort to address environmental contamination brought on by its use of Agent Orange in the Vietnam War, this according to the New York Times. Agent Orange is a toxic herbicide which contains dioxin –a known carcinogen- used by the U.S. military to defoliate Vietnamese forests, which left a legacy of cancer, birth defects, and environmental contamination, with an estimated 3 million Vietnamese people exposed. 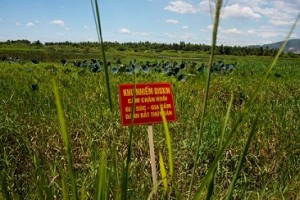 Previous efforts to reforest and fence off contaminated areas have been carried out to prevent local animals and residents from being exposed to soil contaminated with 2,3,7,8-tetrachlorodibenzo-p-dioxin (TCDD), the potent dioxin contaminant of Agent Orange. TCDD is the most dangerous form of dioxin and the levels found in soil samples from Central Vietnam are more than 200 times the “acceptable” level set by the U.S. Environmental Protection Agency (EPA). Efforts to educate the residents about the dangers of dioxin are difficult since most cannot read and many speak local tribal dialects and not Vietnamese.

Dioxin, which is very persistent in the environment, accumulates in animal fat, resulting in many grazing livestock contaminated with high levels of dioxins. Poor sanitation and a local diet that relies on fish caught in contaminated waters and fowl that peck on tainted soil keep dioxin exposure a constant threat to the locals. Many families living in nearby villages surrounding contaminated areas have health problems, such as limb deformities, blood disorders, and deafness that have been blamed on dioxin exposure. Elevated levels of TCDD have also been found in breast milk and blood of the local residents.

The U.S. sprayed about 20 million gallons of Agent Orange and other herbicides in Vietnam, Cambodia and Laos, halting only after scientists commissioned by the U.S. Department of Agriculture (USDA) issued a report expressing concerns that dioxin showed “a significant potential to increase birth defects.” According to the New York Times, by the time the spraying stopped, Agent Orange and other herbicides had destroyed 2 million hectares, or 5.5 million acres, of forest and cropland, an area roughly the size of New Jersey. Three locations in Vietnam retain particularly high levels of the chemical in their soil. The U.S. will target one of these sites, a 19-hectare area near Da Nang Airport, to test the economic and technological feasibility of a soil treatment process, even though the U.S. is not admitting liability. Used in the U.S. to treat highly contaminated “superfund” military sites, the soil treatment process involves removing soil from the site and heating it to 355 °C to destroy dioxin. The U.S. is investing $43 million in the project, and it is expected to take about four years. Other potential clean-up options include putting all the soil in a toxic waste dump (the cheapest method) or, incinerate soil it at high temperatures (the most effective). Other proposals include pouring concrete all over the contaminated sites, or simply walling them off to humans and animals.

“This morning we celebrate a milestone in our bilateral relationship,” David B. Shear, the American ambassador to Vietnam, said at a ceremony attended by senior officers of the Vietnamese military. “We’re cleaning up this mess.”

“It’s a big step,” said Ngo Quang Xuan, a former Vietnamese ambassador to the United Nations. “But in the eyes of those who suffered the consequences, it’s not enough.”

Nguyen Van Rinh, a retired lieutenant general who is now the chairman of the Vietnam Association for Victims of Agent Orange/Dioxin, has vivid memories of hearing American aircraft above the jungles of southern Vietnam and seeing Agent Orange raining down in sheets on him and his troops. Plants and animals exposed to the defoliant were dead within days. Many of his troops later suffered illnesses that he suspects were linked to the repeated exposure to Agent Orange, used in concentrations 20 to 55 times that of normal agricultural use. A class-action case against chemical companies filed in the U.S. on behalf of millions of Vietnamese was dismissed in 2005 on the grounds that supplying the defoliant did not amount to a war crime and that the Vietnamese plaintiffs had not established a clear causal effect between exposure to Agent Orange and their health problems. However, a study investigating the long-term immune effects of dioxin found that exposure to dioxin during development or while nursing diminishes the young’s capacity to fight infection later in life. Another found that exposure to dioxin in the womb can affect female reproduction for generations, reducing fertility and increasing the chance for premature delivery.

“I would like to have one message sent to the American people,” Mr. Rinh said. “The plight of Agent Orange victims continues. I think the relationship would rise up to new heights if the American government took responsibility and helped their victims and address the consequences.”

The effects of Agent Orange are not only felt in Vietnam. Studies have found that U.S. war veterans exposed to Agent Orange have developed chronic lymphocytic leukemia, Hodgkin’s disease and non-Hodgkins lymphoma and diabetes. Many children of exposed veterans have been affected by their parents’ exposure to the chemical and show a wide range of symptoms. Dioxin has been found in milk, cheese, beef, pork, fish, chicken, and other animals, as well as soil and sewage sludge in the U.S. High levels of dioxin still exist in the Tittabawassee and Saginaw rivers and floodplains in Michigan, after being dumped there decades ago by Dow Chemical Co. Clean-up and restoration for these systems are still being debated. Even though dioxin levels in the environment have dropped considerably in recent years from their peak in the late 1970’s, it is important to be vigilant in the foods consumed in order to avoid an exposure hazard, since dioxins are persistent and bioaccumulative.

Earlier this year, EPA released a revised dioxin exposure assessment for acute human health risks, despite objections from the chemical industry. In the report, EPA identified several adverse health endpoints associated with dioxin exposure including, decreased sperm concentrations and motility (semen quality) and increased thyroid-stimulating hormone levels in offspring, but generally found that the typical American has low risk exposures to dioxins, even though independent panels have called on the U.S. to reduce dioxin exposures.

Today, most dioxin exposure in the U.S. is attributable to emissions from waste incinerators, copper smelters, and makers of paper pulp, but dioxins are still manufactured and released as contaminants of pentachlorophenol and phenoxy herbicides like 2,4-D. Regulations have curtailed dioxin emissions by 90% since the 1980s, but the pollutants persist in the environment, so they continue to contaminate livestock forage and meat and dairy products. The structure of dioxins closely resembles that of polychlorinated biphenyls (PCBs) and polychlorinated dibenzo furans (PCDFs), which also have similar toxicological and environmental effects.