Washington, DC–(ENEWSPF)–April 7, 2015. Scientists working with the United States Department of Agriculture (USDA) don’t have adequate protections from pressure and retaliation when researching issues that threaten the interests of powerful agrichemical corporations like Monsanto, according to Public Employees for Environmental Responsibility (PEER), which filed a petition for rule-making with the agency last month. PEER’s petition seeks to strengthen USDA’s Scientific Integrity Policy, and urges the agency to adopt best practices used in other federal agencies in order to prevent political suppression or alteration of studies. 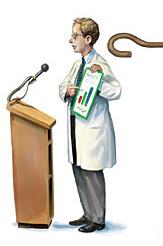 USDA adopted a new integrity policy in 2013 in response to a 2009 memorandum issued by President Obama with the goal of “ensuring the highest level of integrity in all aspects of the executive branch’s involvement with scientific and technological processes.” PEER alleges that USDA’s policy falls far short of this aim, even containing language which actively encourages the agency to suppress scientific work for political purposes. USDA’s current policy reads, “scientists should refrain from making statements that could be construed as being judgments of or recommendations on USDA or any other federal government policy, either intentionally or inadvertently.” PEER explains that USDA management regularly uses this provision as reason for suppressing technical work of employees when industry stakeholders disagree with the scientific conclusions reached.

The petition reports that “agribusiness interests, such as those of Monsanto Corporation, have access to top agency managers” and are “invited to lodge complaints and concerns about the published work of agency scientists.” Scientists and researchers have been pressured to water down studies, remove their name from authorship, endure indefinite delays in approving controversial papers, or even fully retract studies. PEER reports that scientists targeted by industry are subject to demotions, threats to damage careers, disruptive investigations, disapproval of formerly routine requests, suspensions without pay or disciplinary actions over small matters, and intimidation from supervisors intent on pleasing “stakeholders.”

“A largely invisible and toothless Scientific Integrity Policy enables corporate influence over critical USDA scientific research decisions,” stated PEER Executive Jeff Ruch, noting the USDA policy promises a website to display case-specific and other information but no such site exists. “USDA’s scientific integrity program is like a black hole, allowing no information to escape and no light to penetrate.”

PEER details one case, which occurred “in recent months,” where USDA scientists received a “summons to meet with Secretary Vilsack in an effort to induce retraction of a paper that drew the ire of industry representatives.”

At least 10 scientists have been investigated or faced other consequences as a result of research calling into question the safety of certain pesticides, said Mr. Ruch to Reuters. “Your words are changed, your papers are censored or edited or you are not allowed to submit them at all,” said a decidedly anonymous scientist who experienced such intimidation to Reuters.

PEER’s petition recommends USDA adopt model provisions which already exist in other agencies’ integrity policies. The organization has put together a report card reviewing the Scientific Integrity Policy of each agency. Agencies are scored for scientific misconduct, public communications of science, and transparency of policy decision-making. USDA scored 33 out of 100 possible points on the organization’s rubric. The petition recommends USDA update its policies regarding the ability of scientists to publish and discuss research, contest decisions to block release of data, file and pursue complaints of political manipulation of studies, and enjoy protection from reprisal for filing a complaint or engaging in research with potential political implications.

“There is no reason why USDA scientists should labor under safeguards far inferior to those extended to their colleagues working inside other agencies,” Ruch added. “To earn public credibility for its scientific work, USDA needs to spell out procedures by which political influences can be policed and scientists protected while allowing outside review of its handling of allegations and disagreements.”

With independent science both in and outside of the U.S. pointing to a growing list of impacts from pesticides and genetically engineered (GE) crops, ranging from the decline of bees to the carcinogenicity of the widely used herbicide glyphosate, it is critical that federal scientific agencies tasked with protecting human and environmental health be able to inform the public without the taint of an industry whose only interest is in protecting profits. PEER’ press release and petition to USDA can be viewed here.

In anticipation of the stranglehold industry currently displays over USDA, the Organic Foods Production Act created an independent advisory board, the National Organic Standards Board (NOSB), from a wide range of organic stakeholder groups to provide recommendations to the National Organic Program and USDA on products and processes allowed in certified organic products. It is critical that consumers make their voice heard over that of industry, and protect organic from being overtaken by the same agribusiness interests that dominate conventional agriculture at USDA. Comments to the NOSB are due by midnight tonight. Please go to Beyond Pesticides’ Keeping Organic Strong page, and provide a unique public comment to the board.