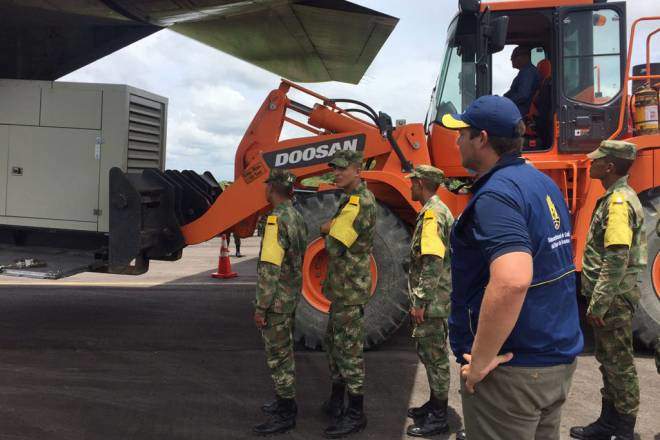 COLUMBIA–(ENEWSPF)–4 April 2017 – Very heavy rainfall triggered the landslides that hit Colombia over the weekend, but “exceptional” level of rains were not the sole cause, the United Nations weather agency said today, noting that many other factors, such as loss of forest cover, added to the devastation.

“The weather was not the only cause of the tragedy, many other socio-economic factors, including deforestation, came into play,” Clare Nullis, a spokesperson for the World Meteorological Organization (WMO), told the media at a regular press briefing at the UN Office at Geneva (UNOG).

March is typically a rainy month in the country, but the quantities of rainfall seen in the past week have been exceptional, she explained, adding that the municipality of Mocoa, hardest-hit by the landslides, saw 129 millimetres of rainfall within 24 hours on 31 March.

Of that amount, 80 per cent of the precipitation fell in just three hours, explaining the size of the tragedy.

According to a Flash Update by the UN Office for Coordination of Humanitarian Affairs (in Spanish), as of 2 April 254 people have been confirmed to have perished in the disaster, 262 have been injured and 441 are missing.

The casualty figures are approximate and are expected to rise.

Furthermore, as of 3 April, more than 500 municipalities are at the of risk of landslides in the country, and of those 182 had orange to red alerts, noted Ms. Nullis.

She added that while the national meteorological service is very strong and well-equipped, it faced considerable challenges.

“There are more than 700,000 rivers and bodies of water, and it is impossible to have monitoring stations at each one of them,” said the WMO spokesperson.

Further, clarifying that the cause of the disaster was not El Niño, crediting a senior official at the Colombian Institute of Hydrology, Meteorology and Environmental Studies, she said that climate variability and climate change would continue to produce rain and drought, and that prevention is the most important.

She also informed the briefing that in the short-term, Colombian Meteorological Agency weather forecasts indicate that there would be no or very light rainfall in the affected areas till 6 April.

The long-term predictions for the season were for above average rainfall in the area.