Washington, DC–(ENEWSPF)–October 28, 2014.  Last week the White House Council on Environmental Quality (CEQ) announced new guidelines for federal agencies to incorporate pollinator friendly practices at federal facilities and on federal lands. Critical to pollinator health within these guidelines is a requirement that agencies should “[a]cquire seeds and plants from nurseries that do not treat their plants with systemic insecticides.” Further, the document states that, “Chemical controls that can adversely affect pollinator populations should not be applied in pollinator habitats. This includes herbicides, broad spectrum contact and systemic insecticides, and some fungicides.” Following the U.S. Fish and Wildlife Service’s announcement this summer eliminating neonicotinoid use on National Wildlife Refuges, this represents the latest instance of a federal entity recognizing the danger caused by systemic pesticides, and recommending against their introduction in pollinator habitat. 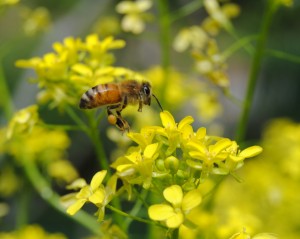 However, while the CEQ’s new pollinator friendly practices for federal facilities provide great information on appropriate plants by region, encourage education and outreach to citizens, and prescribe neonicotinoid-free plant selection, the guidelines fall just short of establishing or encouraging an organic management system for federal facilities. Although the report recommends against using chemical controls in established pollinator habitats, and indicates that “[I]n general, the use of natural and mechanical strategies are preferred to the use of pesticides,” the report does sanction the use of non-selective herbicides in site remediation “as safe and effective methods for controlling plants.” Alternatives to herbicide use for problem vegetation in site remediation can be found here.

Concurrent with CEQ’s announcement, the General Services Administration (GSA) also stated it is in the process of internally reviewing pollinator friendly guidelines for facility standards at “all new project starts.”

These announcements are in response to the Presidential Memorandum, issued at the close of National Pollinator Week 2014, which directed federal agencies to establish a Pollinator Health Task Force, and tasked agency leads at the U.S. Department of Agriculture (USDA) and U.S. Environmental Protection Agency (EPA) to develop a pollinator health strategy within 180 days that supports and fosters pollinator habitat. Although the CEQ and GSA announcements represent movement in the right direction, the White House also announced last week that it would miss the self-assigned December 20th deadline to provide a pollinator health strategy. “In light of continued declines of our nation’s pollinators, and another tough winter coming up for our managed honey bee colonies and U.S. beekeepers, this delay is simply unacceptable,” said Jay Feldman, executive director of Beyond Pesticides.

In late September, Beyond Pesticides joined with 16 other non-profit environmental and consumer groups in a letter to EPA Administrator McCarthy regarding President Obama’s Memorandum. The letter requested EPA move swiftly to suspend the most harmful uses of neonicotinoids after assessment, and address the gaps that allowed systemic insecticides on to market on a “conditional” basis, without a full review of pollinator impacts. In a 2010 internal EPA memo leaked to the beekeeping community from an undisclosed source at EPA, it was revealed that the agency determined the field study used to register the neonicotinoid clothianidin was unacceptable, yet EPA allowed the chemical to be registered on a conditional basis. In a September report the Government Accountability Office criticized EPA’s oversight of this process, noting that the agency does not have a reliable system to track conditional registrations, and will misclassify pesticides as conditional when they may simply require regulatory action. U.S. beekeepers, Beyond Pesticides, Center for Food Safety, and Pesticide Action Network North America are engaged in pending litigation against EPA’s failure to protect pollinators from dangerous neonicotinoids.

The new guidelines from CEQ are the first in a holistic response to an ongoing crisis that has put in jeopardy pollination services that contribute $20-30 billion to the U.S. agricultural economy. Numerous nutrient dense crops, such as almonds, apples, cherries, cranberries, pumpkins and many more depend on bees and other pollinators to produce fruit and seed. Without healthy pollinator populations in a best case scenario the price of healthy food will increase, and in the worst, shelves may go bare.

The White House Task Force must go further to promote honey bee health and habitat by suspending the uses of highly toxic, persistent, and systemic neonicotinoids, which are applied en masse throughout the country (see map), and make their way into pollinator friendly plants. While it is encouraging that CEQ is addressing poison plants, an overarching strategy that encourages organic practices is the only long term solution to pollinator declines.

For more information on how to improve pollinator health and habitat see the BEE Protective webpage, where you can find the Pollinator Friendly Seed and Nursery Directory, which lists sources of seeds and plant starts that are safe for bees and not poisoned with neonicotinoids or other pesticides. And join in on National efforts to push the marketplace towards pollinator friendly practices by delivering a card to Lowe’s this Halloween, asking the retailer to stop selling poisoned plants and bee-killing pesticides.