Washington, DC–(ENEWSPF)–June 9, 2015.  Agricultural pesticides are sprayed intensively throughout the growing season in New York’s conventional apple orchards. Researchers at Cornell University found that as the use of pesticides on these farms increased, the abundance of wild bees declined significantly. The study, published in the Proceedings of the Royal Society B, focuses in on the effects of conventional pesticide use on wild bees, which have often been overlooked in the midst of an ongoing crisis with managed honey bee colonies. 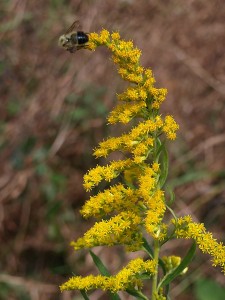 “Because production of our most nutritious foods, including many fruits, vegetables and even oils, rely on animal pollination, there is an intimate tie between pollinator and human well-being,” said Mia Park, an assistant professor at the University of North Dakota and the paper’s first author, who worked on the study as a Cornell entomology PhD graduate student.

Ms. Park and her colleagues analyzed wild bee populations on 19 apples orchards across the state of New York between 2011 and 2012. Data was broken down by class of pesticide (fungicide, insecticide, herbicides), and timing of applications (before, during, and after flower bloom). Researchers also analyzed the percentage of natural areas within the surrounding landscape.

The study uncovered a number of insights into the way that conventional pesticide use on a typical apple farm impacts native pollinator populations. Wild bee numbers declined significantly as pesticide use increased, but the overall impact of pesticides on wild bees was found to be highest in generations following pesticide exposure, indicating that pesticides affect bee reproduction or offspring. Further, researchers found that fungicides, widely regarded as having low toxicity to bees, had a measurable impact on wild bee abundance. “High and repeated exposure was the likely explanation” for this finding, according to the study.

Even more concerning is the relationship between timing of fungicide applications and wild bee populations. Fungicide applications prior to apple flower blooming resulted in the steepest decline in wild bee abundance and diversity. This result indicates that wild bees are visiting orchards before apple trees begin to bloom. Further, researchers found insecticide applications impacted bees the most after bloom occurred. The authors explain that, while honey bees are placed in orchards for a short time during bloom, wild bees are more frequently exposed to chemical pesticides because they continue to forage in and around apple orchards before and after the bloom period.

This finding is particularly important considering recent label changes proposed by the U.S. Environmental Protection Agency (EPA) as part of President Obama’s National Pollinator Health Strategy. The new changes call for “temporary pesticide-free zones” while beekeepers are under contract with farmers for pollination services. As this new data shows, these changes may stop some honey bees from coming into acute contact with certain neonicotinoid insecticides, but will do absolutely nothing to address pesticide exposure to wild bees.

“We found there is a negative response of the whole bee community to increasing pesticide use,” said PhD candidate and lead author Mia Park.

There was one bright spot for pollinator health in the study. Researchers found that increasing natural habitat around farms – in other words, providing a true pesticide-free refuge for native pollinators – mediated the effects of pesticide use and resulted in less pronounced declines. While the National Pollinator Health Strategy calls for increased pollinator habitat, it is critical that any new planting prohibit pesticide use, in order to protect both our managed and wild pollinators. Beyond Pesticides and allies continue to call for EPA to suspend the use of the most highly toxic neonicotinoid insecticides, as the agency conducts further research.

This new study reveals how the intensive use of multiple pesticides on a typical conventional farm adversely affects the health of wild pollinators. Even synthetic pesticides widely considered of low toxicity to bees had an impact on these native species because they were sprayed at such high frequency during the course of these pollinators’ lives. Evidence continues to mount that, beyond issues with individual pesticides, there exists a wholly reversible and preventable problem in conventional agriculture’s entire approach to pest control. The approach taken on most organic farms reveals how to foster native pollinator health and broader biodiversity while maintaining pests at low levels. Instead of prophylactic use of pesticides and scheduled sprays, responsible organic farms focus on fostering habitat for pest predators and pollinators alike, set action levels for pests based upon monitoring, and only resort to judicious use of least-toxic pesticides when other cultural, structural, mechanical, and biological controls have been attempted and proven ineffective.

To learn more about the benefits of organic agriculture, visit Beyond Pesticides’ webpage. And for more information and actions you can take to stem the global decline of both native and managed pollinators, support Beyond Pesticides BEE Protective campaign.

Sources: Cornell University, Proceedings of the Royal Society B, www.beyondpesticides.org