CALIFORNIA–(ENEWSPF)–September 22, 2011.  Nearly 23,000 registered nurses are on a one-day strike today at 34 Northern and Central California hospitals, saying they will not accept attacks on RN rights to speak out for patients or cuts in healthcare or retiree coverage for nurses or other hospital workers.

The walkout affects two of the biggest and wealthiest hospital chains in California, Sutter Health and Kaiser Permanente, as well as Children’s Hospital in Oakland. The RNs are members of the California Nurses Association/National Nurses United. The strike ends at 7 a.m. on Friday though Sutter and Children’s have announced plans for a punitive lockout of nurses to extend the dispute.

Sutter nurses will be protesting up to 200 sweeping demands for concessions that they say would, among other concerns, restrict their ability to effectively advocate for patients against the budget-focused priorities of Sutter managers and effectively force nurses to work when sick, dangerously exposing extremely ill patients to infection.

Additionally, Sutter RNs oppose Sutter management’s bid to reduce nurses’ healthcare coverage and retiree health benefits, and a broad array of other contract concessions. The Sutter RNs are also protesting years of widespread cuts in patient care services that they say have restricted access to needed medical care for thousands of Northern California communities and left a trail of broken promises by Sutter executives.

NNU has long challenged this market-based program of cuts in patient services, one reason Sutter has singled out RNs for retaliation with the draconian demands it has made of nurses, charges CNA. “Nurses will never be silenced in standing up for our patients and our communities, or our members and our families,” says Children’s Oakland RN Martha Kuhl.

At Kaiser, the RNs are walking out in a sympathy strike to support Kaiser coworkers who are facing management demands for deep cuts in their health coverage and retirement plans. 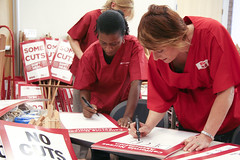 Children’s Oakland RNs will be on strike for the third time in a year over what they call punitive management efforts to cut their health coverage, as well as demands they say would make it prohibitively expensive for nurses to bring their own children to get care at the hospital where they work. Children’s has also refused to address the safe staffing issues of charge nurses not having a patient assignment and providing break relief at times when it does not interfere with patient care needs in the professional judgement of the nurse.

Speaking for many striking RNs, Children’s RN Martha Kuhl, notes, “They are taking advantage of the economic times and trying to roll back improvements we have won over many years through our CNA contract. Everyone deserves healthcare and if nurses can’t afford healthcare, who will be able to? I am a caregiver and patient advocate and that extends into my community as well.”

“Everyone deserves high-quality healthcare and retirement security, whether you are a registered nurse, another caregiver, or any other American. That should be the hallmark of a humane and caring society,” adds CNA Co-President Zenei Cortez, RN who heads the Kaiser CNA Joint Bargaining Council.

“We staunchly refuse to be silenced on patient care protections,” said Sharon Tobin, an RN at Sutter Mills-Peninsula in Burlingame. “A common theme throughout management’s proposals is removing our presence on committees that address important patient care issues and nursing practices.  As nurses, we speak up, and we insist on standards that safeguard our patients, but Sutter doesn’t want to hear about anything that might cut into their huge profits.”

“Sutter’s arrogance in these demands is paralleled by its severe cuts in patient services, especially those it deems less profitable, regardless of how that affects patients,” said Efren Garza, a behavioral health RN at Alta Bates Summit who has seen psychiatric services slashed throughout the Sutter system.  “That is most evident in Sutter’s bid to close San Leandro Hospital and sharply reduce services at St. Luke’s Hospital in San Francisco, both hospitals that, not coincidentally, serve many low-income, working-class patients.”

Like Sutter, Kaiser is extremely wealthy, and hardly needs to be exacting severe cuts from employees, reporting over $1.9 billion in profits last year alone.

“When we are all struggling to keep our head above water it is unconscionable for Kaiser Permanente to attempt to extract cuts from direct healthcare workers,” said Catherine Kennedy, who is a neonatal intensive care nursery RN at Roseville. “If Kaiser wants to cut, it should be from the 14 Kaiser executives who are making over $1 million dollars a year, not the healthcare workers who have devoted themselves to the patients and the community.”