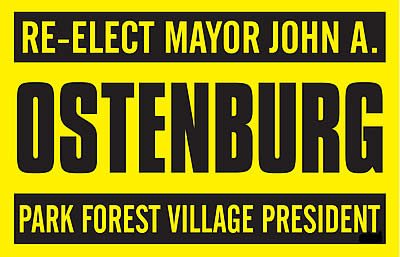 “First thing this morning, I began receiving phone calls from residents who had my campaign signs in their yards, complaining that the signs had been removed sometime late last night or early this morning,” Mayor Ostenburg said. “It appears that the greatest number of signs removed were in the Minocqua Street, Shabbona Street, Sauk Trail, and Lakewood Boulevard areas,” he said.

In the e-mail message, Mayor Ostenburg noted that the all the removed signs were on private property and had been placed in those yards with the permission of the owners. He said he was aware that Village of Park Forest staff would remove any signs that were located on right-of-ways or public property, or on lots with vacant or homes; however, he said, that was not the case with any of the signs that were removed over the Tuesday night-Wednesday morning period.

“Every sign that I have to replace is an additional minimal cost to my campaign of $3.50. I believe this constitutes theft of property,” Mayor Ostenburg wrote to Chief Fleming. “While I cannot identify who was responsible for this action, I would request that Park Forest police personnel be observant of any suspicious activity that might be occurring during the late evening/early morning hours.”

Mayor Ostenburg said that mischievous removal and/or destruction of yard-signs occurs in virtually all campaigns, “but I’ve never seen such a concerted and universal action in Park Forest as what occurred last night. I find this very troubling.” He said he will press charges against anyone found to be responsible for the theft of the signs.

According to Mayor Ostenburg, members of his campaign staff and volunteers have been advised by him not to engage in any type of retaliatory action. “No retaliatory action will be tolerated and I personally will report any of my staff or volunteers to the police department if I learn they do anything to signs of my opponent,” Mayor Ostenburg said. He encouraged his opponent to take a similar stand as regards his volunteers.

“This is Chicago-style politics at its worst,” Mayor Ostenburg said. “It’s shocking that such tactics are being imported into our area. Let’s hope it stops before it escalates into more serious types of destructive behavior.”

Related: A blast from the past: Signs Of The Times: Campaign Police Reports