The Few, The Proud, The Geocachers 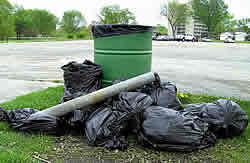 Park Forest, IL–(ENEWSPF)– The first few days in May were a big deal for geocachers – people who find hidden “treasures” with GPS receivers. Many were celebrating the 10th anniversary of geocaching.

At the Central Park Wetlands in Park Forest, one geocacher sponsored a CITO event. CITO stands for Cache In – Trash Out. While geocachers were looking for the caches, they were also picking up letter. “There was a lot of blown in litter from the baseball field and trails,” stated one geocacher from Oswego, Il. “We didn’t get very far, but we cleaned up a lot of wrappers, bags and bottles.”

“Every year I like to sponsor at least one CITO to help give back,” says the organizer. The Recreation and Parks Department of the Village of Park Forest donated the garbage bags and disposed of the trash. The gloves and cache materials were donated by ME4E — Multidisciplinary Education of the Environment. They also offered a tour of the new Wetland Discovery Center and green improvements to the Aqua Center after the event.

A total of 12 garbage bags of debris were collected from the creek bordering the south edge of the wetland. Several softballs, a large pipe and numerous cigarette butts were removed. One geocacher even found a Frisbee from an event in 2000. He collects them, so it was a pleasant surprise and he took it home. Another CITO event will be planned for fall at the Central Park Wetlands since this one was a huge success.

To learn more about geocaching, visit www.geocaching.com. In addition, ME4E is currently offering a geocaching workshop to youth at the Richton Park Library. They also offer many public programs at other local libraries and natural areas year-round. A list of scheduled events can be found on their Facebook page at www.facebook.com/Me4E.org