Washington, DC–(ENEWSPF)–October 2, 2015.  Twelve worker safety violations are categorized as “serious” and result in thousands of dollars in fines. Highly toxic pesticides should not be sprayed on workers, but that is what Oregon-based company Applebee Aviation did to a number of its employees, according to the Oregon Department of Agriculture. On September 30, the Department, which is responsible for regulating state and federal pesticide laws, issued a citation revoking the Applebee’s operating license in the state of Oregon and levying a fine of $1,100. 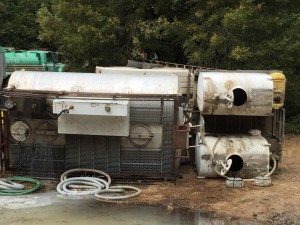 Applebee’s chemical truck rolled over loaded next to the Smith River in California.

The crackdown came after Darryl Ivy, who worked as an Applebee Aviation hazardous materials truck driver, became a whistle blower and reported on dangerous and unsafe practices he witnessed during numerous aerial spray operations. Ivy recorded videos of the illegal activities on his cell phone before he went to an emergency room for treatment of illness due to pesticide exposure.

“I had sores and rashes, was spitting up blood and felt very sick after three weeks on the job,” said Mr. Ivy. “I’ve worked in a lot of dangerous occupations before, but had never seen such careless treatment of workers and poor work practices that put all of us, nearby communities and the environment at risk of pesticide contamination.”

“I felt it was my duty to report what I witnessed to the authorities,” said Mr. Ivy. “The results of their investigation proves that Applebee’s pesticide practices are illegal,” he continued.

“The impact for me is that my doctor has recommended sinus surgery which has a risk of causing blindness and I’m still undergoing lung function tests.

Last month, an Applebee Aviation chemical delivery truck crashed and spilled 500 gallons of water containing glyphosate residue as well as diesel fuel just off Highway 199 in Northern California, along the Smith River. The same company was involved in a fatal crash along Highway 38 in Southern Oregon that killed the driver and spilled a powerful herbicide, atrazine, into a salmon stream.

Ivy had reported to authorities that Applebee did not properly maintain the brakes and other pesticide tank seals on their trucks.

The response from two state agencies comes on the heels of a weighty discussion in the Oregon legislature after hearing dozens of complaints about poisoning from aerial pesticide sprays. Helicopter companies like Applebee Aviation spray thousands of acres of Oregon forests with tank mixes of pesticides every year. The environmental advocacy group, Beyond Toxics, worked with legislators during the 2015 session to pass HB 3549, a bill to help address a long history of public complaints about sickness associated with aerial pesticide sprays.

“Although new laws were passed to establish no-spray buffer zones around homes and schools and set stiffer fines for pesticide violations, legislators barely scratched the surface of the problem,” said Lisa Arkin, executive director of Beyond Toxics. “The Darryl Ivy case is a clear example of the highly hazardous practice of aerial pesticide spraying hurting workers as well as nearby residents.”

According to research by Beyond Toxics, residents in 11 Oregon counties have been sickened from aerial spraying of industrial timberlands. Symptoms include nausea, rashes, diarrhea, headaches, asthma, bleeding noses and eye damage.

National pesticide watchdog groups have been tracking the situation in Oregon. “Aerial spraying of weed killer on national forests stopped 20 years ago but still continues in Oregon,” commented Jay Feldman, executive director of Beyond Pesticides, based in Washington DC. “These practices are out of date with modern science and sustainable forestry management approaches.”

Applebee will be required to provide proof that the company has fixed more than a dozen identified problems before it can get re-licensed for business in Oregon. The state agencies cited violations including: not training workers to handle hazardous pesticides, not providing chemical safety data sheets, not providing protective gear to prevent chemicals from splashing into eyes and onto skin, and not conducting monthly inspections of equipment, vehicle and worksite safety. Other actions were identified, including the company having workers wash their pesticide-contaminated clothes in public laundry facilities without proper precautions to prevent contaminating other people’s clothing.

All unattributed positions and opinions in this piece are those of Beyond Toxics and Beyond Pesticides.